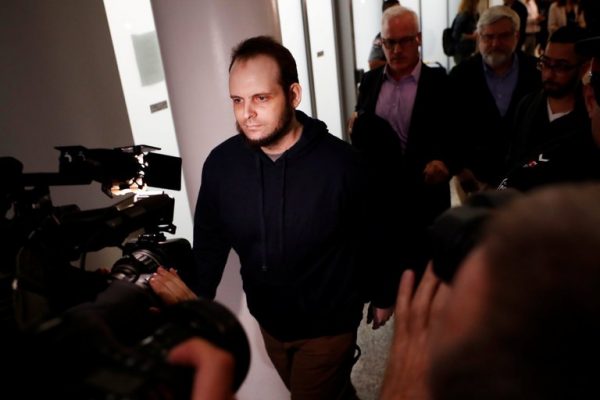 Joshua Boyle after arriving in Toronto on Friday. He and his pregnant wife, Caitlan Coleman, were seized in October 2012 by the Haqqani network in Afghanistan. Credit Mark Blinch/Reuters
Share:
A Canadian man who was held hostage with his American wife and children in Afghanistan by a Taliban faction for five years said late Friday that his captors had killed their infant daughter and raped his wife.

The former hostage, Joshua Boyle, 34, who was seized in October 2012 by the Haqqani network with his pregnant wife, Caitlan Coleman, 31, lashed out at his captors in a statement he read to reporters after landing in Toronto with Ms. Coleman and three young children who were born during captivity.

The family was rescued after a gun battle on Wednesday between the militants and Pakistani troops acting on information provided by American intelligence.

One of the abductors shouted, “Kill the hostages,” and Mr. Boyle suffered minor shrapnel wounds to a leg during the raid, his parents said. The family was later taken by helicopter to Islamabad, Pakistan, before flying to Canada.

His hands sometimes shaking as he read from a small notebook at the airport, Mr. Boyle said, “The stupidity and evil of the Haqqani network’s kidnapping of a pilgrim and his heavily pregnant wife engaged in helping ordinary villagers in Taliban-controlled regions of Afghanistan was eclipsed only by the stupidity and evil of authorizing the murder of my infant daughter.”

The birth and killing of the infant, Margaret Boyle, had not been previously revealed. Mr. Boyle said she had been killed after he refused to accept “an offer” from the militants. He did not elaborate or take questions.

In a video made during their captivity, Ms. Coleman, who is from Pennsylvania, said that she had been “defiled.” Visibly angry, Mr. Boyle said on Friday that his wife had been raped by a guard with the assistance of the guard’s superiors. He demanded action against “criminal miscreants” for their actions against his family.

Ms. Boyle and the three children did not appear. The Toronto Star reported that they were being taken by a police van for a four-hour drive to the home of Mr. Boyle’s parents in Smiths Falls, Ontario.
Every week, receive a handpicked selection of news and opinion plus exclusive commentary from New York Times journalists.

The brief statement from Mr. Boyle only raised further questions about why the couple were in Afghanistan when they were abducted. Until Friday, their family had said they were backpacking.
But in his statement, Mr. Boyle said they had been in the country on a mission to help “the most neglected minority group in the world, those ordinary villagers who live deep inside Taliban-controlled Afghanistan.” He also described himself as a “pilgrim,” and said they had been in a region that government and aid agencies had failed to reach, suggesting that their effort was self-styled.

The Associated Press reported that on the plane from London to Toronto, Ms. Coleman sat in the aisle of the business-class cabin wearing a tan-color head scarf and nodded wordlessly to confirm her identity to a reporter onboard the flight. Their two oldest children sat next to her, while Mr. Boyle sat with their youngest child in his lap.

State Department officials accompanied them on the plane.

President Trump has praised the Pakistanis for their role in freeing the family. “This is a positive moment for our country’s relationship with Pakistan,” he said on Thursday.

During the flight, Mr. Boyle also gave a handwritten statement to The A.P. expressing disagreement with American foreign policy.

“God has given me and my family unparalleled resilience and determination, and to allow that to stagnate, to pursue personal pleasure or comfort while there is still deliberate and organized injustice in the world would be a betrayal of all I believe, and tantamount to sacrilege,” he wrote.

He then nodded to one of the State Department officials and said, according to The A.P., “Their interests are not my interests.”