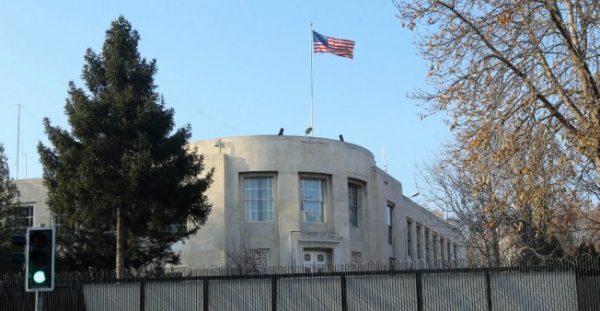 US embassy in Ankara, Turkey
Share:
The United States and Turkey on Sunday scaled back visa issuing services in each other’s countries in a deepening diplomatic row sparked by the arrest of a Turkish staffer at the American mission in Istanbul.

The American embassy in Ankara said that “recent events” forced the US government to reassess Turkey’s “commitment” to the security of US mission services and personnel in the country.

In order to minimise the number of visitors while the assessment is carried out, “effective immediately we have suspended all non-immigrant visa services at all US diplomatic facilities in Turkey,” it said.

Statement from the U.S. Mission to Turkey pic.twitter.com/RjTU3BfSXZ


Non-immigrant visas are issued to all those travelling to the United States for tourism, medical treatment, business, temporary work or study. Immigrant visa services are only for those seeking to live in the US permanently.

Turkey responded by suspending “all visa services” for Americans in the US, saying the measures also apply to visas issued online and at the border.

Statement from the Turkish Mission to the U.S., October 8, 2017 pic.twitter.com/4i0BwInOCj


Turkey’s Foreign Minister Mevlut Cavusoglu backed his country’s action in a recent interview with France 24. “There are serious accusations and evidences,” he said.

In an apparent attempt to mock the US announcement, the Turkish embassy in Washington issued two statements that were almost word-for-word copies of that from the American embassy in Ankara.

The statements said concerns over US commitment to the security of Turkish diplomatic facilities and personnel necessitated the restrictions, but the fact that they only apply to Americans and also include visas issued at the border and online indicate the move is punitive rather than security-based.

The first statement from the Turkish embassy said the restrictions apply to “visas in passports” while the second replaced that wording with “sticker visas”. It was unclear if that meant that visas already stamped in passports would not be accepted.

Beyond its mention of “recent events”, the American embassy statement made no explicit mention of the arrest by Turkish authorities of a local Turkish staffer working at the US consulate in Istanbul.

The employee was remanded in custody by an Istanbul court late Wednesday on accusations of links to the group of US-based preacher Fethullah Gulen, blamed by Ankara for last year’s failed coup against President Recep Tayyip Erdogan.

The staffer has been formally charged with espionage and seeking to overthrow the Turkish government.

The US embassy on Thursday said it was “deeply disturbed” over the arrest and rejected the allegations against the employee as “wholly without merit”.

It also condemned leaks in the local press that it said came from Turkish government sources that were “seemingly aimed at trying the employee in the media rather than a court of law”.

But Erdogan’s spokesman Ibrahim Kalin has defended the arrest, saying “there must be serious evidence” and pointing to a phone call made from the Istanbul consulate to a key suspect on the night of the coup.

For Soner Cagaptay, Director of the Turkish Program at the Washington Institute for Near East Policy in Washington DC, the situation signifies the unfolding of an historic crisis in US-Turkey relations.

“The idea is that this step would convince the Turkish elites to persuade Erdogan to stop harassing US citizens in Turkey – I think Erdogan will do the opposite and escalate,” he told AFP.

The pro-government Yeni Safak daily newspaper described it as “a scandalous decision from the United States”.

Turkish officials had expressed hope of a new page in Ankara-Washington relations under President Donald Trump.

Turkey has pressed Washington for the extradition of Pennsylvania-based Gulen, who denies any link to the coup bid – but the lack of movement on the issue has further strained ties.

Meanwhile, members of Erdogan’s security detail were indicted by US authorities after clashes with protesters during an official visit this year, infuriating the Turkish president.

American pastor Andrew Brunson, who ran a church in the western city of Izmir, has been held by Turkish authorities since October 2016 on charges of being a member of Gulen’s group.

Erdogan suggested last month that Turkey could release him in exchange for Gulen but Washington showed little interest in the proposal.