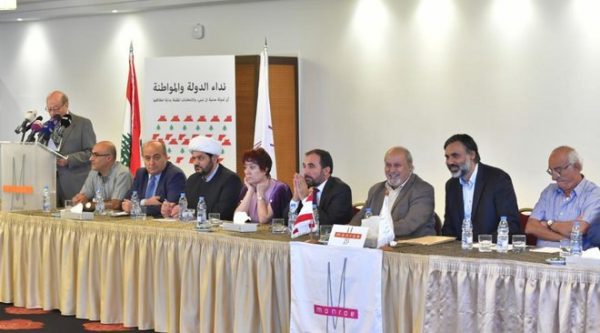 A recent meeting of around 60 public Shiite figures in Beirut, including university professors, writers, journalists and business people, has triggered a series of negative responses on social media by pro Hezbollah and Amal supporters .

The group said: “We are a group of democratic Lebanese citizens from the Shiite community, and our main concern is the establishment of a just and capable state, and the Shiite community is but a part of our work and activity, especially as parliamentary elections approach with an electoral law which still requires candidates to have sectarian affiliation.”

The response on social media — accusations of “treason” and cries of “embassy’s Shiites,” a derisory term used by Hezbollah to discredit its opponents by implying they are in the pay of foreign governments — was expected, according to Dr. Harith Sulaiman, an academic and one of the prominent group members.

“We face offensive rumors if we take an independent stand against the Shiite duo of Hezbollah and Amal. We know we’ll pay for it,” he said. “I have been a political activist and patriot for the last 40 years; I studied in France and I might have had certain ambitions, but I did not try to achieve my goals through either of the two Shiite powers. I’ve now decided to retire because I do not want to follow either of them.”

The group stated that their meeting was “evidence we don’t plan on establishing a political party or a Shiite organization, but that we are keen on finding a political climate that is convenient for all Lebanese people and through which they can perform their duties and receive their rights. Our meeting today is not a fleeting one, but the beginning of establishing a national opposition front that will correct the division of Lebanese politics.

“During the meeting, it was agreed that the quota policy has disrupted and paralyzed government agencies and changed Lebanon’s direction toward serving regional agendas, which, if continued, will eventually lead to the fragmentation and demise of Lebanon,” the group’s statement continued. “From here, we call for searching for ways out after the country was brought to a state of intransigence. It is time for a Lebanese civil state to be established, and it should start with the parliamentary elections.”

Media worker and civil activist Ali Al-Amin pointed out that the meeting brought together left-wingers, conservatives and civil activists from South Lebanon, Bekaa and Beirut. They do not share the same ideology but they do share a desire for a civil state. “The appeal we made is a founding statement for this common space,” he said.

“There exists a Shiite dilemma in Lebanon: We can’t dream of being able to break Hezbollah’s dominance. Hezbollah is a regional armed force that uses its power to practice sectarian mobilization, and it is troubled by the existence of Shiites who declare that they oppose its policies and ideologies. We are paying for our stances against the campaigns that accused us of treachery, and we have been oppressed on several occasions. Any Shiite who opposes Hezbollah is accused of treason.”

Shiite figures in the meeting agreed that Hezbollah’s sectarian mobilization had begun to escalate in 2006 after Israel’s war on Lebanon, and continued during its fight alongside Syria “when they switched from calling for a fight against Israel to calling for a holy war — jihad.”

However, the group believes the upcoming parliamentary elections, based on the new law that adopts proportional representation, are an opportunity for achieving a ballot-box breakthrough.

“In the last quarter-century, we haven’t seen any breakthroughs in electoral lists in which the Shiite duo is allied — neither in the south nor in Baalbek-Hermel,” Al-Amin said. “This is an indication to any observer that there are no elections in these areas, but rather the use of the organs of state to exert influence over them. Hezbollah chief Hassan Nasrallah once said, ‘We are headed to a referendum, not an election.’ For us, sovereignty is a matter of vital importance and we have the right to tell them they’re committing forgery and violating the law.”

The independent Shiite figures believe the outcome of last year’s municipal elections, in which some individuals overcame the traditional Shiite alliance, offers cause for optimism. They do not believe there is a contradiction between their call for a civil state and using a unified Shiite front to achieve it.

“The Lebanese regime divided us into sects and regions, so what (are we) supposed to do? There is a Shiite problem and if certain figures are not replaced, nothing will change,” businessman Kareem Marwa said.
“Lebanon is governed by the balance of powers. We know this, but we wish to say that we are Lebanese and Arabs, and the new election law may either allow for a seat or not, but it’s our duty to provide the people of Lebanon — especially Shiites — with options if we wish the state to come first.”

Journalist Kassem Kassir, a close associate of Hezbollah, doubts that these figures will remain united when it comes to their electoral project because he believes “they have nothing in common — on the contrary, actually; there are conflicts between them. Moreover, they have already attempted to form groups but were marginalized by the electoral alliances between the March 14 Forces and the Shiite duo.”

Kassir said he believes “these figures are trying to seize the opportunity and take advantage of a regional event to unite as opposition to Hezbollah. However, these figures form an elite group that does not constitute a popular cause, so how will it survive the parliamentary elections without powerful electoral support?”

But Dr. Sulaiman’s vision goes beyond the parliamentary elections. “In the light of Hezbollah’s involvement in the Syrian mess, what we’re doing is protecting our people from death,” he said. “Every day I go to the university and see the walls filled with photos of students I’ve known being mourned by Hezbollah; I find it quite painful. When they fought Israel, we used to say ‘May they rest in peace,’ but the tragedy is greater today because those young people are fighting in defense of Bashar Assad. Those young men are dying thrice: Once because they died, once because they fought the wrong battle, and once because they are supporting a tyrannical ruler. The reason why we’re here is that we appeal for the truth and want to say ‘Enough is enough’ and defend our youth.”

“We cannot despise our students, relatives or neighbors — what we do is because we love them and wish to protect them from death,” he continued. “Those who are responsible for their harm are the ones who said ‘We will be wherever we must be.’ It is the responsibility of Qasem Soleimani because it means we must be whatever Iran wishes us to be, and this is unacceptable. We are more concerned about the Hezbollah youth than about Iran and Hezbollah’s leadership.”