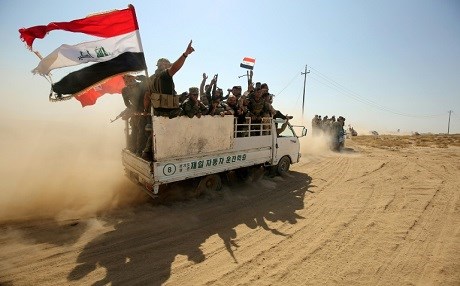 Iraqi forces said Thursday they had retaken the centre of Islamic State (IS) group stronghold Hawija and were pushing forward in their assault on one of the jihadists’ last enclaves in the country.

Troops, police and paramilitaries “liberated the whole of the centre of Hawija and are continuing their advance,” the operation’s commander, Lieutenant General Abdel Amir Yarallah, said.

Government and allied forces backed by a US-led coalition launched an offensive last month to oust the IS group from Hawija, a longtime insurgent bastion.

The town is among the final holdouts from the territory seized by the jihadists in 2014 and its recapture would leave only a handful of remote outposts in IS group hands.

The United Nations said on Tuesday that an estimated 12,500 people had fled the town since the launch of the offensive to retake Hawija and surrounding areas last month.
The UN’s humanitarian affairs office said the number of people still in the town was unknown but could be as high as 78,000.

It said humanitarian agencies have set up checkpoints, camps and emergency sites capable of receiving more than 70,000 people who could flee.

Hawija, 230 kilometres (140 miles) north of Baghdad, is one of just two significant areas of Iraq still held by the IS group, along with a stretch of the Euphrates Valley near the Syrian border which is also under attack.