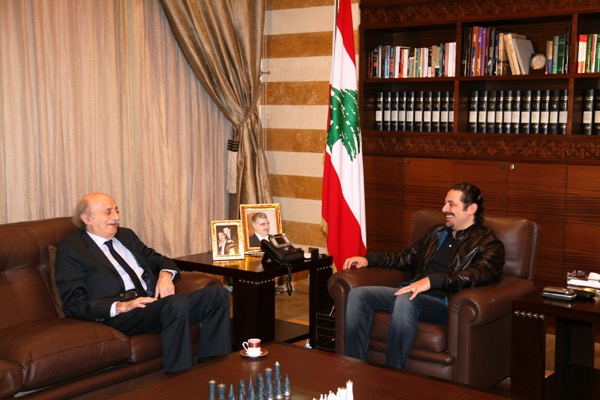 Prime Minister Saad Hariri and Progressive Socialist party leade MP Walid Jumblatt have reportedly rejected all attempts aiming to “normalization of” relations with Syria, and have stressed adherence to the ministerial statement, the pan-Arab al-Hayat daily reported on Tuesday.

Both men have “affirmed adherence to the content of the ministerial statement regarding neutralization of Lebanon from the wars and conflicts raging around it”, the  daily quoted its sources as saying , adding ” they have rejected attempts to normalize ties with the Syrian regime under the pretext that there is a need for this communication to discuss the return of Syrian refugees to their towns and villages.”

The sources  reportedly stressed that Hariri and Jumbaltt “refuse to pave the way for relations with the Syrian regime through political talks.”

The sources  however  said that both leaders pointed the need for the return of the displaced back to Syria “because Lebanon can not bear the burden of hosting them in light of the economic and financial situation.”

They considered “incitement campaigns” against the displaced as “unbeneficial” but saw a role for the United Nations High Commissioner for Refugees, “which has to determine the safe areas in Syria to arrange the procedures to return them.”