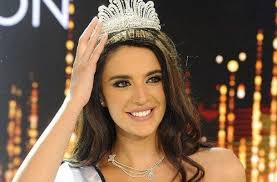 Meet the newly crowned Miss Lebanon 2017, Perla El-Helou, who believes that protest movements work better if they first agree on shared objectives.
The 22-year-old business administration graduate beat off competition from 14 other contestants to succeed 2016 title holder, Sandy Tabet.
Having made to the final five, El-Helou was asked: “In your opinion, can civil society protest movements change the reality of Lebanon?”
She replied that “protesters should first agree on the objectives to be achieved in order to ensure the effectiveness of their movement.”
It was clearly a winning answer as the brunette from Baabda managed to beat Jana Sader, Sabine Najem and Reem Khoury, who were the three runners-up.
In a show hosted by LBC’s Dima Sadek, the fate of the contestants was in the hands of an eclectic group of judges made up of: Harout Fazlian, head of the Philharmonic Orchestra of Lebanon, Kristina Bazan, international blogger, Fady El-Khatib, basketball player, Ibrahim Maalouf , trumpeter and composer.
The moment she won.