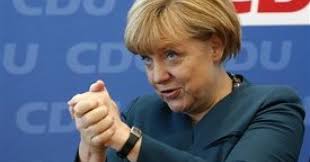 German Chancellor Angela Merkel secured a fourth consecutive term on Sunday after her Christian Democrats (CDU) and the allied Christian Social Union (CSU) won the largest parliamentary bloc with 33 percent of the vote.

Their closest rivals, the centre-left Social Democrats (SPD), slumped to 20.5 percent – a new post-war low – while the far-right Alternative for Germany (AfD) finished in third place with 12.6 percent of the vote, securing its first seats in the Bundestag.

The result for the anti-immigrant AfD marks by far the strongest showing by a nationalist party in Germany since World War II with commentators calling it a “watershed moment” in the history of the German republic. The top-selling Bild daily spoke of a “political earthquake”.

AfD supporters gathered at a Berlin club, cheering as public television reported the outcome, many joining in a chorus of the German national anthem.

Hundreds of protesters rallied outside, shouting “Nazis out!” while smaller AfD demonstrations were held in other cities across the country.

Merkel must now form a coalition government – an arduous process that could take months as potential partners weigh whether they want to share power with her.

She struck a pragmatic tone when she spoke to supporters in Berlin shortly after initial results were announced. “Of course we had hoped for a slightly better result,” Merkel said. “But we mustn’t forget that we have just finished an extraordinarily challenging legislative period, so I am happy that we reached the strategic goals of our election campaign.”

“We are the strongest party; we have a mandate to build the next government – and there cannot be a coalition government built against us,” she added.

Her erstwhile partner, the SPD, announced that it was not interested in joining a coalition soon after exit poll results were released. Merkel’s CDU has ruled with the SPD as its junior partner in a “grand coalition” marked by broad agreement on major topics, from foreign policy to migration.

Martin Schulz, SPD party leader and Merkel’s main challenger, told the ZDF broadcaster: “We cannot have an extreme right-wing party leading the opposition in Germany, therefore … we will go into opposition,” he said, adding: “Our role is quite clear: We are the opposition party.”

Merkel must therefore look to the business-friendly Free Democrats (FDP), which staged a comeback to take 10.5 percent of the vote, as well as the Greens with their 9.5 percent.

As Europe’s longest-serving leader, Merkel now joins the late Helmut Kohl, her mentor who reunified Germany, and Konrad Adenauer, who led Germany’s rebirth after World War II, as the only post-war chancellors to win four national elections. The woman dubbed the “eternal chancellor” is now on track to match Kohl’s impressive 16-year reign.

For many in the West, Merkel’s victory comes as a relief in an increasingly turbulent world, with hopes high that she will serve as a cool-headed counterweight to both US President Donald Trump and Russia’s Vladimir Putin as well as being a key EU ally to reformist French President Emmanuel Macron.

But the AfD’s record election result is sure to bring a new set of challenges, as Germany and other Western nations struggle with a resurgent right wing.

“We may have many challenges to address, notably the arrival of the far right in parliament,” Merkel said Sunday evening. “We will conduct a detailed analysis, because we want to win back the far-right vote by responding to their questions with appropriate policies.”

AfD: ‘We will change this country’

AfD co-leader Alexander Gauland hailed the election results as marking a “great day in the history of our party”.

“We did it – we are in the German parliament, and we will change this country,” he told a crowd of supporters.

Just hours after winning its first seats in parliament, however, the AfD was hit by party infighting with its co-chief Frauke Petry declaring on Monday that she won’t join its Bundestag group, catching colleagues by surprise.

“I decided after careful reflection that I will not sit with the (AfD) parliamentary group” in the Bundestag, Petry told a press conference alongside other key figures in the party before abruptly leaving the room.

Petry, who has long been locked in a dispute with more hardline AfD colleagues, won a seat in Sunday’s election and said she would still serve as an MP.

She had openly criticised Gauland for saying that the AfD would “go after” Merkel and her government. “That is rhetoric that I think… would not be seen as constructive by voters,” she told public broadcaster ZDF.

The European Jewish Congress expressed alarm at the AfD’s success, adding: “We trust that centrist parties in the Bundestag will ensure that the AfD has no representation in the coming governing coalition.”

French President Emmanuel Macron was among the first to congratulate Merkel, promising that the two key European partners would keep up their “essential cooperation”

At Merkel’s final stump speech Friday in the southern city of Munich, right-wing activists had tried to drown her out with whistles and chants of, “Get lost”.

But the 63-year-old refused to be derailed from her stability-and-prosperity mantra, telling the crowd that “the future of Germany will definitely not be built with whistles and hollers”.
Schulz, for his part, has recalled with pride the SPD’s history of resisting the Nazi regime and told a Berlin rally that “this Alternative for Germany is no alternative. They are a shame for our nation.”

Aside from the populist rhetoric, the past two months of campaigning have been widely criticised as lacklustre, with few hot-button issues dividing the main contenders.

The more outspoken Schulz, former president of the European parliament, told voters to reject Merkel’s “sleeping-pill politics” and vote against “another four years of stagnation and lethargy”.

But in greying Germany, the low-key and reassuring message of stability and prosperity pitched by Merkel’s conservatives may have proved enticing to the more than half of Germany’s 61 million voters who are age 52 and over.