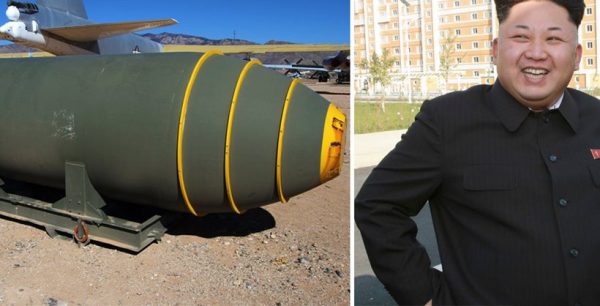 North Korea said Sunday that it successfully conducted a test of a hydrogen bomb meant to be loaded onto an intercontinental ballistic missile (ICBM).

The announcement was made on state-run television. A newsreader called the test a “complete success” and said the “two-stage thermonuclear weapon” had “unprecedented” strength. North Korea’s leader Kim Jong Un ordered the test, according to the announcement.

It is the rogue nation’s sixth, and most powerful, nuclear test.

The announcement came a few hours after a 6.3-magnitude “explosion” was detected at 12:29 p.m. local time in North Korea, according to the United States Geological Survey (USGS) announced Sunday.

According to the USGS, the seismic activity occurred 24 kilometers east northeast of Sungjibaegam, North Korea.”Possible explosion, located near the site where North Korea has detonated nuclear explosions in the past,” read a statement on the USGS website, before confirmation that it was indeed a nuclear test.

The USGS said that a second seismic event occurred 22 kilometers east northeast of Sungjibaegam. “Seismic event collocated with the larger possible explosion 8 minutes and 32 seconds earlier,” read a statement on USGS’s website. “This significantly smaller event is likely a secondary feature (possibly a structural collapse) associated with the larger event.”

Eui-yong said Sunday that President Moon Jae-in will seek every available diplomatic measure, including new sanctions from the United Nations Security Council. He said Moon will also discuss with the Trump administration ways to deploy the “strongest strategic assets” the U.S. has.

Speaking at a press conference Sunday at the South Korean Ministry of Defense, Cho Han-kyu, the director general of operations with the Joint Chiefs of Staff, said the military “strongly condemns North Korea in conducting ICBM-level missile launches and nuclear tests, even stronger than those conducted in the past, regardless of our government’s suggestions to ease military tension and bring peace to the Korean peninsula.”

Condemnation of the test came from China and Russia, as well.

China’s Ministry of Foreign Affairs said in a statement, “The Democratic People’s Republic of Korea has once again conducted a nuclear test in spite of widespread opposition from the international community. The Chinese government resolutely opposes and strongly condemns it.”

The Russian Foreign Ministry said in a statement Sunday that North Korea’s nuclear test “deserves the strongest condemnation,” adding that immediate dialogue and negotiations are necessary. It says that’s the only way settle the Korean Peninsula’s problems, “including the nuclear one.”

The ministry said Russia is willing to participate in negotiations, “including in the context of the implementation of the Russian-Chinese road map.”

South Korea’s weather agency, the Korea Meteorological Administration, said on Sunday that the apparent nuclear test appears to have been several times stronger than its previous test.

The agency estimated that the nuclear blast yield of the presumed test was between 50 to 60 kilotons, or five to six times stronger than the North Korea’s fifth test, conducted in September 2016.

Prior to North Korea’s announcement, Japan confirmed that the rogue nation conducted a nuclear test. “It is absolutely unacceptable if North Korea did force another nuclear test, and we must protest strongly,” Prime Minister Shinzo Abe said.

The North Korean government released photos earlier Sunday of Kim Jong Un talking with his lieutenants as he watched a silver, peanut-shaped device that was apparently the purported thermonuclear weapon destined for an ICBM. What appeared to be the nose cone of a missile could also be seen near the alleged bomb in one picture. The photo could not be independently verified. Another photo showed a diagram on the wall of a bomb mounted inside a cone.