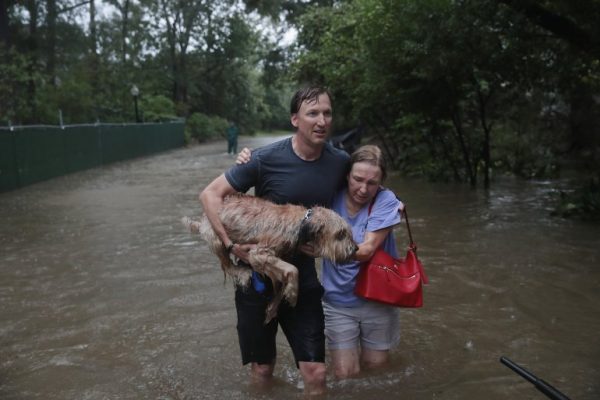 After a polarizing election and a swirl of controversies that further highlighted their deep divides, Americans have embraced the Texas floods as a rare opportunity to pull together as one.

Since unleashing on Friday night, monster storm Harvey has managed to not only halt normal life in Texas but also silence much of the rancor that has pervaded public discourse since Donald Trump came to power.

While the letup may only be temporary, political rivals that have been at each others’ throats have been suddenly emphasizing what unites Americans, while offers of help — from the east coast to the west — have been gratefully received in the largest state in the south.

“I’m not hearing the vitriol that we’ve heard in the past seven months,” said Sherry Bebitch Jeffe, a professor at the University of Southern California.

“This is an incredibly tragic situation, so it’s not without risk if you get partisan,” she added.

Trump’s relentless attacks on political rivals, the death of an anti-racism protester at a white supremacist rally in Charlottesville, Virginia and fierce debate over the removal of Confederate-era statues have helped paint a picture of a country riven with division.

Trump’s critics have accused him of exacerbating the divide, particularly by insisting there were “very fine people” on “both sides” of the Charlottesville protest in a free-wheeling press conference on August 15.

But two weeks on, Trump played the role of unifier in chief with a visit to Texas to survey the damage wrought by Harvey.

“Tragic times such as these bring out the best in America’s character, strength, charity and resilience are those characters,” Trump said on the eve of his departure.

“We are one American family. We hurt together, we struggle together, and believe me, we endure together. We are one family.”

Trump’s words have been echoed by opponents. Nancy Pelosi, leader of Trump’s rival Democrats in the House of Representatives, said the response to Harvey “reminds us our nation’s best qualities: our compassion, our generosity and our unity in the face of national tragedy.”

Some of the earliest offers of help for victims of Harvey came from New York, seen in many ways as the polar opposite of Texas but which shares a common bond as a victim of another deadly hurricane, Sandy, in 2012.

“Just as this nation came together for New York in the aftermath of Hurricane Sandy, New York stands ready to provide these states with personnel, equipment and whatever else they might need,” said Governor Andrew Cuomo.

Similar offers of help have come from states across the US, while sports and showbiz stars such as singer Beyonce and the Kardashian family have pledged significant donations. Actress Sandra Bullock has reportedly donated $1 million to the Red Cross.

Julian Zelizer, a professor of history and public affairs at Princeton University, said political unity could well unravel when it comes to the question of finding funds to help Texas bounce back.

“When these budgetary matters come front and center, as we saw with Sandy, that is usually when bipartisanship quickly breaks down.”

Several commentators have recalled how prominent Texan politicians such as Senator Ted Cruz tried to block federal funding for victims of Sandy.

Pete King, a congressman from New York, indicated that he would vote to help Texas after Harvey but had not forgotten what happened when it came to finding cash for his constituents and in neighboring New Jersey.