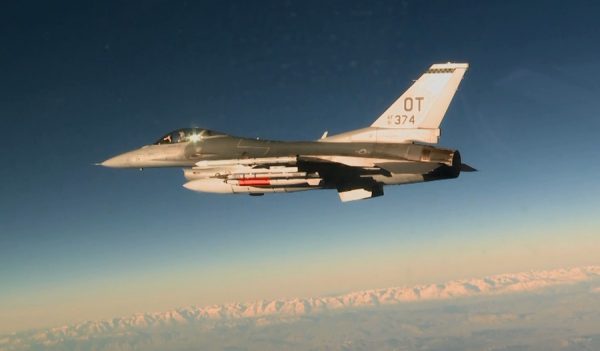 FILE PHOTO: An Air Force F-16C dropped an inert B61-12 during a development flight test by the 422nd Flight Test and Evaluation Squadron at Nellis AFB, Nevada, on March 14, 2017 © U.S. Air Force
Share:

he National Nuclear Security Administration has announced the successful flight tests of its B61-12 gravity bombs in non-nuclear assemblies. It comes as US lawmakers reportedly push for a withdrawal from a landmark nuclear treaty with Russia.

The second qualification flight test for the nuclear weapon was carried out by the NNSA and the US Air Force, with the first one having been successfully conducted in March.

The first test drew criticism, including from Brian Becker, director of the anti-war ANSWER coalition, who told RT: “In order to placate his critics, in the media and in politics, Trump has given a blank check to his generals. So they are having a grand time right now, and they are testing all the weapons they’ve been wanting to test, but not been able to.”

B61-12 gravity bombs, without a nuclear warhead, were dropped from F-15E fighter jets at Tonopah Test Range in Nevada on August 8. The tests were intended to check the bomb’s “non-nuclear functions and the aircraft’s capability to deliver the weapon,” according to an NNSA statement.

The B61-12 will replace the B61 gravity bomb, one of the main pillars of the US Air Force’s nuclear arsenal and one part of the so-called air-land-sea triad, which also includes Ohio-class submarines and B-52 strategic bombers. The first production of the bomb is scheduled for March 2020.

The B61, which entered service in 1968, is under a life extension program designed to replace its aging components as well as the consolidation of four B61 variants with “no overall change in military requirements or characteristics.”

“The B61-12 life extension program is progressing on schedule to meet national security requirements,” Phil Calbos, acting NNSA deputy administrator for defense programs, stated. “These realistic flight qualification tests validate the design of the B61-12 when it comes to system performance.”

The second test of the nuclear bomb could indicate that Washington is speeding up its rearmament program, the editor-in-chief of National Defense magazine , Igor Korotchenko, warned.

“The fact of the test of this modification of the nuclear bomb indicates that the US continues an accelerated rearmament program of its tactical nuclear arsenal in Europe, as well as that both Washington and Brussels are considering the scenario of a limited nuclear war in Europe,” the military observer told RIA Novosti.

The move comes just two months after Politico reported that US senators were pushing legislation to compel President Donald Trump to take steps to develop new missiles which would be “the first steps to jettisoning what is known as the INF treaty.” Moscow said that such a move would be “ridiculous” and would damage America itself as well as its European allies.

In July, Republican Senator Tom Cotton, a member of the House Armed Services Committee, suggested bypassing the milestone treaty that bans the testing, production and possession of land-based intermediate-range missiles by both Moscow and Washington. He urged the White House to “facilitate the transfer of cruise missile technology to our (American) allies,” explaining that “only the US and Russia have signed this treaty. No other country did.”

After the announcement of the plans to upgrade the B61 nuclear weapon, Russia expressed its concerns that the move could destabilize global security.

“This means that the armaments threshold could in theory have been lowered, which of course will destabilize the situation to a certain extent,”said the deputy head of Russia’s Foreign Ministry, Sergey Ryabkov, in August 2016.

At the same time, the characteristics of the new version of the B61 would “increase the temptation” to use the weapons, according to Mikhail Ulyanov, the head of the ministry’s Department for Non-Proliferation and Arms Control.

Over the next 30 years, Washington could spend up to $1 trillion on a massive weapons modernization program. President Trump has called for the US to “greatly strengthen and expand its nuclear capability,” though he criticized the Obama administration’s costly modernization program during the election campaign.
RUSSIA TODAY