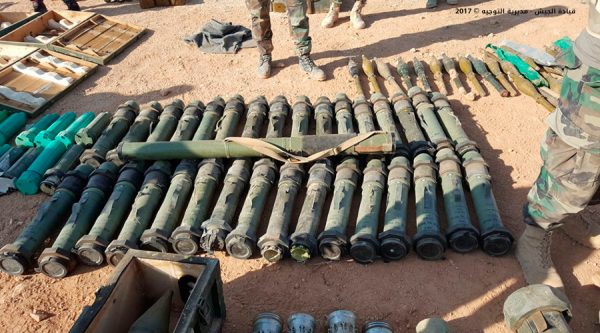 After searching areas recently liberated from ISIS along the Syria-Lebanon border, the Lebanese army has uncovered a large amount of weapons, ranging from factory-made missiles to crude homemade devices, the army said, releasing photos of the spoils.

The army has seized a large amount of weapons and munitions left behind by the Islamic State (IS, formerly ISIS/ISIL) in the recently liberated areas. The stashes were found in command centers, entrenchments and underground tunnels, according to the army’s statement issued Monday.

The weapons have been uncovered as several territories occupied by IS have been liberated in a simultaneous offensive launched by Lebanese and Syrian armies alongside with Hezbollah. The main goal of the operation is eradication of IS-held pocket on the border of the two countries.

According to the army statement, the stash contained a large amount of small and large caliber munitions, anti-tank and anti-air missiles, a large number of anti-tank grenades as well as munitions for recoilless guns, mortars and all sorts of mines and improvised explosive devices.

In a related development the  Lebanese military intelligence units have detained an Islamic State (Daesh) senior member responsible for an assault on the country’s troops in 2014 on the Syrian border, a military source told Sputnik Monday.

“Military intelligence has detained  Basel Abdel Kader in Wadi al-Araneb, a Syrian national, in Aarsal … [he was] in charge of security in Daesh,” the source said, adding that the terrorist was responsible for the attack on a military base in Aarsal’s vicinity in 2014 when the Daesh militants kidnapped several Lebanese servicemen whose fate is still unknown.

The Iranian backed Hezbollah militant group , which is supporting the Syrian army on the other side of the border  is reportedly using drones  in its attack against ISIS