Red Cross: Syria destruction ‘on a scale not seen since World War II 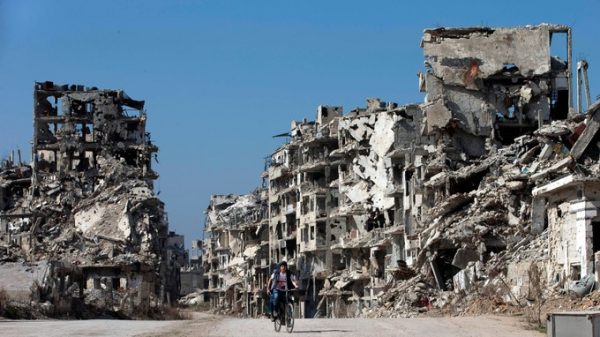 The old city of Homs, pictured in February 2016. Credit: AP. The Caesar Act will prevent countries from taking advantage of Syria’s dire need for reconstruction. Russia, the United Arab Emirates, Bahrain, Iran, Turkey , Lebanon and others have expressed interest in reconstruction efforts in Syria, hoping to benefit from the future political and economic capital they may provide.
Share:
The scale of destruction in Syria is on a level not seen since the Second World War, a charity head has said.

Red Cross chief executive Mike Adamson likened the damage caused during the ongoing civil war to the aerial bombardment of London and Dresden more than 70 years ago.

More than half of Syria’s 22.8 million pre-war population have been displaced within the country and across its borders in search of safety.

“When you see the destruction of the old city and then the flats and houses that people used to live in – there is no prospect of people being able to return quickly even if the situation is stable, because the scale of destruction… I’ve never seen anything like it,” Adamson said after returning from a four-day trip to Syria .

“It’s on World War Two scale, in terms of those images we have from the Blitz or Dresden bombings.”

More than half of the city’s 2,000,000-strong population has fled to other parts of Syria or across the border to neighbouring countries since the start of the conflict, the charity said.

Mr Adamson said it was hard now to see a “pathway to resolution”.

He said: “The scale of it is quite hard to get your head around. There’s loss of life, and then there is just a colossal loss of opportunity for a nation.

“I’ve been in a range of disaster situations over the years with the Red Cross, I’ve never quite had this sense of the scale of loss of life, opportunity, livelihood, and of a nation set back by decades.

“Even if peace arrived tomorrow it would take decades to rebuild because so much has been destroyed.”

Aid workers were risking their lives daily, he said, adding that he heard of one volunteer who had been kidnapped 10 times.
ITV