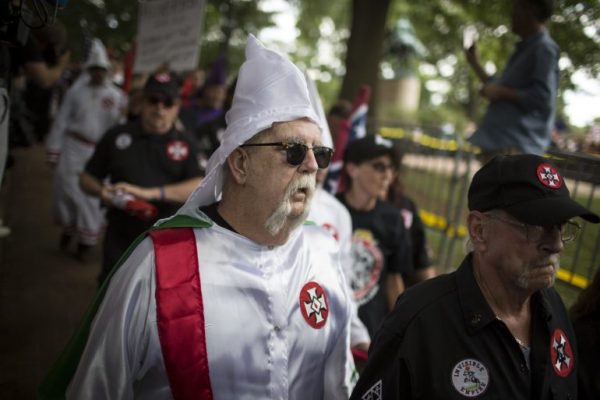 By ABBY JACKSON
Former KKK leader David Duke struck out at President Donald Trump for condemning the violence at a white nationalist rally in Charlottesville, Virginia.

In a series of tweets Duke questioned why the president, whom he usually supports, is attacking white Americans who put him “in the presidency.”

After violence erupted at the “Unite the Right” rally, Trump tweeted, “We ALL must be united & condemn all that hate stands for. There is no place for this kind of violence in America. Lets come together as one!”

So, after decades of White Americans being targeted for discriminated & anti-White hatred, we come together as a people, and you attack us? https://t.co/Rkfs7O2Ykr

I would recommend you take a good look in the mirror & remember it was White Americans who put you in the presidency, not radical leftists. https://t.co/Rkfs7O2Ykr

White Americans are so afraid to speak out that we’ve allowed our country to be invaded and our children to be propagandized by marxists. https://t.co/Rkfs7O2Ykr

The rally formed in response to a plan to remove a statue of Confederate general Robert E. Lee from a park in Charlottesville.
Earlier on Saturday, Duke called the rally a “turning point” saying that protesters would fulfill the promises of Trump’s candidacy.

“This represents a turning point for the people of this country. We are determined to take our country back,” Duke said. “We are going to fulfill the promises of Donald Trump. That’s what believed in. That’s why we voted for Donald Trump.”

Trump came under fire during the election for his reluctance to disavow Duke, which he eventually did. Still, Duke supported Trump and publicly celebrated his win in November.
AOL