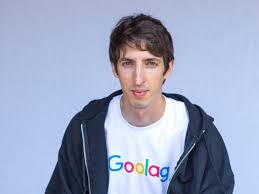 The Google engineer fired for writing a controversial memo about diversity has gone beyond referring to the company as an “echo chamber” that won’t stand for dissent and now says it’s “almost like a cult.”

In an opinion piece for the Wall Street Journal, James Damore gave his explanation for why he was fired, taking a shot at the company’s culture and its famous motto.

“For many, including myself,” he wrote, “working at Google is a major part of their identity, almost like a cult with its own leaders and saints, all believed to righteously uphold the sacred motto of ‘Don’t be evil.'”

Damore was fired at the start of this week after 3 1/2 years as an engineer for a post he wrote, laying out his view that men are biologically more well-suited than women for many tech jobs.

In a video interview with the conservative blogger Stefan Molyneux that was posted to YouTube earlier this week, Damore called Google a “dream job” with “huge benefits” and said he loved the company.

Damore wrote in the op-ed that he “committed heresy against the Google creed by stating that not all disparities between men and women that we see in the world are the result of discriminatory treatment.”

Damore said that when he tried to engage in “reasoned discussion” with his peers on the issue, “mostly I was ignored.”

While his cause has lit up the conservative blogosphere, Damore chose to quote famous leftist intellectual Noam Chomsky.

“As Noam Chomsky once observed, ‘the smart way to keep people passive and obedient is to strictly limit the spectrum of acceptable opinion, but allow very lively debate within that spectrum,'” Damore wrote.