Truce goes into effect in another Syria ‘safe zone’ 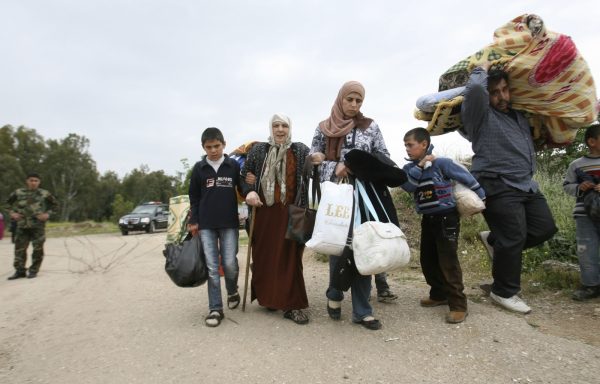 Hezbollah, Nusra Front agree to prisoner swap. Another five captive Hezbollah fighters would then be released once the first convoy reaches its destination in Syria. according to the deal brokered by the Lebanese government
Share:

BEIRUT (AP) — Russia’s Defense Ministry announced a cease-fire for a third safe zone in war-torn Syria on Thursday, paving the way for the delivery of sorely needed humanitarian relief to rebel-held areas north of the city of Homs.

In central Syria meanwhile a swap between Lebanon’s militant Hezbollah group and Syria’s al-Qaida affiliate ended with more than 7,000 fighters and civilians crossing into rebel-held parts of northern Syria in return for the release of five Lebanese militants who arrived in government-held parts of the country.

Military Spokesman Maj. Gen. Igor Konashenkov said Russia would deploy military police in the area on Friday and set up two checkpoints and three observation points around its borders.

“It’s important that people can live again,” said Mustapha Khaled, an opposition activist working for a media center for the town of Talbisah, in north Homs province.

It is the third of four planned cease-fires reached in recent months under an agreement brokered by Russia, Iran, and Turkey in May that aims to “de-escalate” the violent and prolonged Syrian civil war.

Russia and Iran are providing military support to President Bashar Assad, while Turkey sponsors some of the opposition forces arrayed against him.

Pro-government forces have besieged the enclave north of Homs for years, but have been unable to capture it from the opposition even as it recovered territory elsewhere.

Shelling and air strikes against the enclave have eased since the May agreement was signed, said Khaled. Residents will now be expecting further relief.

The agreement, according to notes leaked by the British-based Syrian Observatory for Human Rights monitoring group, follows the model of another cease-fire zone for the suburbs of Damascus.

Both truces were negotiated in Cairo between Russia and what the Ministry of Defense described as the “moderate opposition.”

Aid will be expected to flow again to north Homs, and Russia will man checkpoints around the enclave to facilitate the movement of civilians in and out of the enclave to revitalize the economy.

The agreement also prescribes the release of political prisoners, long a demand of the opposition.

The U.N. has long pleaded with the sides in Syria to allow relief to flow to besieged areas. It says the parties are using food and other basic goods as a weapon of war. Pro-government forces have been responsible for most of the obstructionism.

The north Homs enclave holds 147,000 people, according to the military media arm of the Lebanese militant group Hezbollah, a participant in the conflict.

The government’s air force has cut back its attacks on the four “de-escalation zones” designated in the May agreement.

There are still loopholes for fighting however, characteristic of the cease-fires that have come and gone throughout the war. The government has pounded parts of the Damascus suburbs nominally covered under the cease-fire there, on the grounds that it is targeting al-Qaida-linked militants, as permissible in the agreements.

The Observatory says 170 people have been killed in the 12 days since the cease-fire there went into effect, calling the truce a “failure.” Other such cease-fires have crumbled under the strain of these attacks.

Also on Thursday, a 113-bus convoy from Lebanon carrying some 7,700 refugees and al-Qaida-linked militants crossed a transfer point in the western Syrian province of Hama, into rebel-held Idlib province in northwest Syria. Idlib is dominated by a Syrian affiliate of al-Qaida.

After sunset, all the buses had crossed and five Hezbollah fighters captured by al-Qaida-linked fighters last year arrived in areas controlled by the Syrian government. Hezbollah is fighting in support of Assad’s government in Syria.

The five Hezbollah militants were to drive several hours into Lebanon where a large celebration was being prepared to welcome them in the border village of Qaa.

The swap was part of an agreement struck this week to provide al-Qaida-linked militants with safe passage out of Lebanon. Some 6,000 Syrians elected to leave Lebanon with the fighters. It followed two weeks of battles between Hezbollah and the Syrian government on the one side, and the al-Qaida-linked militants on the other, along the frontier between Lebanon and Syria.