An ejection test examines a missile’s “cold-launch system,” which uses high pressure steam to propel a missile out of the launch canister into the air before its engines ignite. That helps prevent flames and heat from the engine from damaging either the submarine, submersible barge or any nearby equipment used to launch the missile.
Carried out on land at Sinpo Naval Shipyard, Sunday’s ejection test is the third time this month — and fourth this year — that North Korea has conducted a trial of the missile component that is critical to developing submarine launch capabilities, according to the US defense official.
Coupled with reports of increased submarine activity, news of another ejection test comes amid concerns over North Korea’s launch of an intercontinental ballistic missile that appears to have the range to hit major US cities on Friday.
Experts believe if Friday’s test had been fired on a flatter, standard trajectory, it could have threatened cities like Los Angeles, Denver and Chicago.
President Donald Trump told reporters at his second full Cabinet meeting that his administration will be able to take care of North Korea but offered no specifics about what he plans to do.
“We will handle North Korea. We are gonna be able to handle them. It will be handled. We handle everything,” Trump said after a reporter asked him about his strategy.
Asked if the US would strike first, Trump’s press secretary, Sarah Huckabee Sanders said Monday that “all options are on the table,” adding that Trump would not “broadcast” his decisions.
Democrat Sen. Mark Warner said on “Erin Burnett Out Front” Monday that Trump showed “enormous naiveté” by suggesting the nuclear threat from North Korea could be handled so simply. 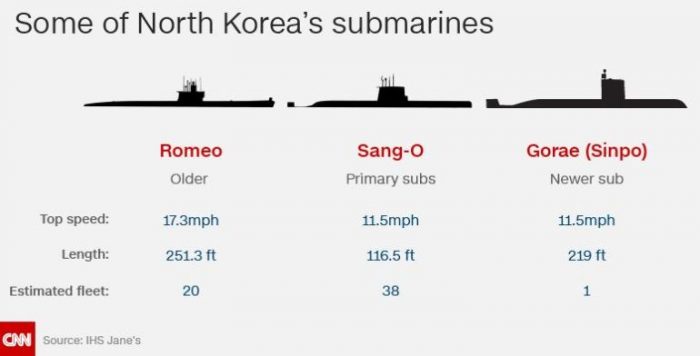 North Korea’s submarine fleet is believed to encompass about 70 subs, though the majority are quite old and likely cannot fire missiles.
When taken together, these developments are concerning because North Korea says it is trying to develop a missile capable of delivering a nuclear warhead to the United States.
Pyongyang has long maintained the ability to legitimately threaten the United States with a nuclear attack is the only way to protect itself against any US-led attempts at regime change.
Land-based and submarine-based missiles are considered two-thirds of what is known as the “Strategic Triad,” a theory that a state must have land, air and sea-based nuclear attack capabilities to successfully deter an enemy from trying to attack it.
The current US intelligence assessment is that the missile program aboard submarines remains in the very early stages.
CNN reported earlier this month that North Korea had sent a diesel-powered Romeo Class sub on an unprecedented patrol and had been outfitting its Gorae Sub with a possible missile launch demonstration tube.
Two US defense officials told CNN at the time that the North Korean Romeo-class submarine was engaged in “unusual deployment activity” in the waters off the coast of Japan and was patrolling farther that it has ever gone, sailing some 100 kilometers out to sea in international waters.
The submarine’s activity was different than the typical training activity usually observed closer to shore, according to the officials.
That activity caused US and South Korean forces to slightly raise their alert level, according to one official.
The US military pays close attention to North Korean submarine activity following the 2010 Cheonan incident where a North Korean sub torpedoed a South Korean Naval vessel.
Last summer, North Korea conducted what experts believed was its first successful submarine missile test, firing a missile called the the KN-11 or Pukguksong-1.
CNN
Share:
Share Tweet Pin It +1
This error message is only visible to WordPress admins