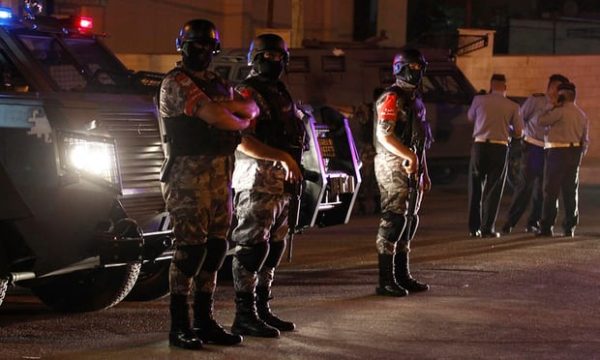 A deadly shooting at Israel’s Embassy in Jordan further complicated Israeli government efforts on Monday to find a way out of an escalating crisis over Jerusalem’s most contested holy site, including mass Muslim prayer protests and Israeli-Palestinian violence.

The shooting, in which an Israeli security guard killed two Jordanians after being attacked by one of them with a screwdriver, led to a diplomatic standoff between the two countries at a time when Jordan is heavily involved in efforts to defuse the crisis over the Jerusalem holy site. Jordan is the Muslim custodian of the shrine, which is also holy to Jews.

Jordanian officials said Monday that the guard could only leave if he first submitted to questioning, according to a news site linked to Jordan’s military. Israel insisted the guard has diplomatic immunity.

Israeli Prime Minister Benjamin Netanyahu said he spoke to the guard and assured him that Israel has experience in dealing with such situation and would bring him home.

The drama played out as President Donald Trump’s Mideast envoy, Jason Greenblatt, headed to the Holy Land on Monday. It was the first sign of a high-level, on-the-ground attempt by the Trump administration to end the standoff between Israel and the Muslim world.

The escalation began earlier this month when Arab gunmen fired from the holy site, killing two Israeli policemen. In response, Israel installed metal detectors at the site, a move that incensed the Muslim world.

The shooting at Israel’s embassy in the Jordanian capital of Amman could further inflame Jordanian public opinion against Israel.

The Amman shooting took place on Sunday evening in a residential building used by the embassy staff.

Israel’s Foreign Ministry said the incident began when two Jordanian workmen arrived at the building to replace furniture. It said one of the workers, later identified as a 17-year-old of Palestinian origin, attacked an Israeli security guard with a screwdriver.

The guard opened fire, killing the teen. A second Jordanian, the owner of the building who was also a physician, was hit by gunfire and later died of his wounds. The guard was lightly hurt, the ministry said.

The Jordanian news site Hala Akhbar, which is linked to the kingdom’s military, quoted diplomatic and security officials as saying that Jordan refused to let the guard leave without an investigation.

The website quoted the officials as saying that Jordan might take “diplomatic measures” if Israel refuses to meet the demand.

Israel’s Foreign Ministry did not refer to Jordanian demands, but said the guard enjoys diplomatic immunity under international conventions.

An Israeli government official said talks were under way whether to evacuate the embassy staff, given the tensions in Jordan.

He said either all or none of the staff would be evacuated, and that the security guard would not be left behind. The official spoke on condition of anonymity because he was not authorized to discuss the diplomatic efforts underway to defuse the situation.

The father of the slain teen on Monday called for an investigation and said he would not bury his son until he was shown security camera footage of the investigation.

Zakariah al-Jawawdeh told The Associated Press that his son Mohammed is a “son of Jordan who was shot on Jordanian soil” and he deserved justice. He described Mohammed as apolitical.

Israel’s security Cabinet met from late Sunday until the early hours of Monday to discuss the crisis at the shrine and the embassy shooting, and was to convene again Monday afternoon.

Netanyahu said Israel is in regular contact “with security and government officials on all levels in Amman to bring as speedy a resolution as possible to this event.”

Israel and Jordan signed a peace deal in 1994, but the agreement remains deeply unpopular in the kingdom where many residents are of Palestinian origin. Jordan and Israel have close security ties, but frequently clash over Israeli policies at the Jerusalem shrine.

Jordan’s ruling Hashemite dynasty, said to trace its ancestry to the Prophet Muhammad, draws much of its legitimacy from its role as protector of the shrine.

Meanwhile, the security Cabinet reached no decision after a six-hour meeting on how to defuse the crisis over the Jerusalem shrine, Israeli media said. The ministers were reportedly reviewing the initial decision on installing the metal detectors and weighing possible alternatives.

Israel has said the metal detectors were a needed security measure to prevent future attacks. However, the government is facing growing domestic criticism, with some commentators saying it did not fully weigh all the repercussions of introducing new measures at the most volatile spot of the Israeli-Palestinian conflict.

Muslim religious leaders have alleged that Israel is trying to expand its control at the site under the guise of security – a claim Israel denies. The tensions have led to mass prayer protests and deadly Israeli-Palestinian violence.

Sabri said newly installed security cameras, described in media reports as a possible alternative to the metal detectors, were discussed.

He said the lawyer was to brief the Muslim leadership later Monday on Israel’s responses.

In another sign of the tense atmosphere, a Palestinian assailant stabbed an Arab citizen of Israel in the neck in central Israel, apparently mistaking him for a Jew, police said. The assailant was detained.

The 37-acre walled compound is the third holiest site of Islam, after Mecca and Medina in Saudi Arabia. It is also the holiest site of Judaism, revered as the place where biblical Temples once stood.