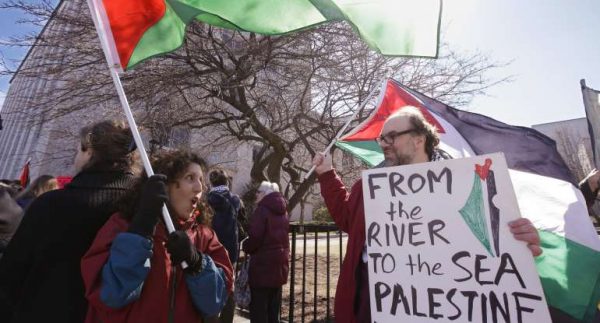 Protestors march along Huntington Avenue at Northeastern University in support of Palestine after a university student organization, Students for Justice in Palestine, was “temporarily suspended for multiple violations of university policy over an extended period of time,” according to a university statement in Boston, Tuesday, March 18, 2014. (AP Photo/Stephan Savoia)
Share:
Support for Israel has dropped by 27 percentage points among Jewish college students in the U.S. since 2010, according to a study released by the Brand Israel Group, a non-profit founded over a decade ago. Fern Oppenheim, the co-founder of the Brand Israel Group, wrote that support for Israel among Jewish college students is now at 57%, down from 84% in 2010, according to her organization’s research.