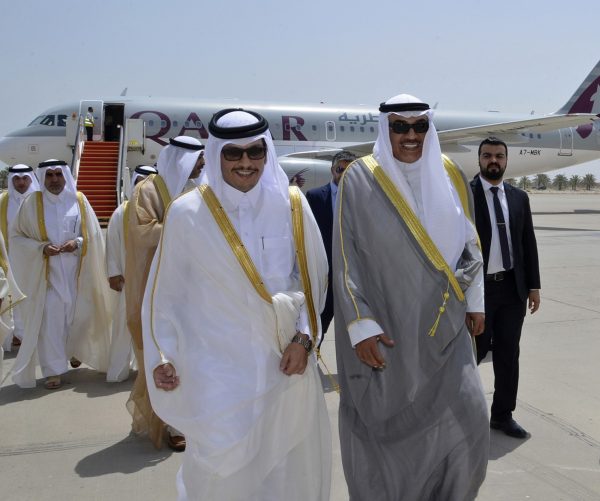 Arab nations isolating Qatar extended a deadline Monday for the energy rich country to respond to their demands by another 48 hours, allowing its top diplomat to carry a handwritten response to Kuwait’s ruler in an effort to end the diplomatic crisis.

Whether another two days will be enough to end the crisis, however, may be a stretch.

Saudi Arabia, the United Arab Emirates, Egypt and Bahrain already have plans to meet in Cairo on Wednesday as the deadline expires to discuss their next moves. Meanwhile, Qataris signed a wall bearing a black-stencil likeness of their ruler, Sheikh Tamim bin Hamad Al Thani, as officials in the host country of the 2022 FIFA World Cup maintain that they won’t allow other nations to dictate their foreign policy.

The crisis began June 5, as the countries cut off diplomatic ties to Qatar over their allegations that the world’s top producer of liquefied natural gas uses it wealth to fund extremist groups and has overly warm ties to Iran. Qatar long has denied funding terrorists, while it maintains communication with Iran as the two countries share a massive offshore natural gas field.

The quartet of countries first restricted Qatar’s access to their airspace and ports, while sealing its only land border, which it shares with Saudi Arabia. They later issued a 13-point list of demands on June 22 to end the standoff and gave Qatar 10 days to comply.

Early on Monday morning after the deadline expired, the countries said they would give Qatar another 48 hours after a request by Kuwait’s 88-year-old ruler, Sheikh Sabah Al Sabah. The emir has been trying to mediate an end to the crisis, as he did in a similar dispute in 2014.

“The response of the four states will then be sent following the study of the Qatari government’s response and assessment of its response to the whole demands,” the countries said in a statement.

Qatar’s foreign minister, Sheikh Mohammed bin Abdulrahman Al Thani, traveled later Monday to Kuwait City, carrying a handwritten note from Sheikh Tamim, according to the state-run Kuwait News Agency. Kuwaiti and Qatari officials did not respond to questions about what the letter said, though a photograph from the meeting showed Sheikh Sabah reading it with no expression on his face.

The White House said Trump urged unity and reiterated the importance of stopping terrorist financing and discrediting extremist ideology. A separate statement carried on the official Qatar News Agency said the emir’s discussion with Trump touched on the need to fight terrorism and extremism in all its forms and sources, and was a chance for the countries to review their bilateral strategic relations.

Trump later tweeted: “Spoke yesterday with the King of Saudi Arabia about peace in the Middle-East. Interesting things are happening!”

Qatar, like the countries lined up against it, is a U.S. ally. It hosts some 10,000 American troops at the sprawling al-Udeid Air Base. The desert facility is home to the forward headquarters of the U.S. Central Command and has been a key staging ground for the campaign against the Islamic State group and the war in Afghanistan.

What comes next remains in question. If Qatar doesn’t agree to the demands, the nations could push forward with financial sanctions or pushing the country out of the Gulf Cooperation Council, a regional body that serves as a counterbalance to Iran. Some Arab media outlets have gone as far as suggesting a military confrontation or new leadership be installed in Qatar.

On Wednesday, the four countries will meet in Cairo to discuss “future steps in dealing with Qatar as well as exchange of points of view and the evaluation of the existing international and regional contacts in this connection,” Egypt’s Foreign Ministry spokesman Ahmed Abu Zeid said.

Meanwhile, Qatari officials have said they won’t back down either. Al-Jazeera, the satellite news network funded by Qatar that the countries demand be shut down, issued a video message saying: “We too have demands. … We demand press freedom.”

“Qatar is not an easy country to be swallowed by anyone,” Qatari Defense Minister Khalid bin Mohammed al-Attiyah told Sky News on Sunday. “We are ready. We stand ready to defend our country. I hope that we don’t come to a stage where, you know, a military intervention is made.”