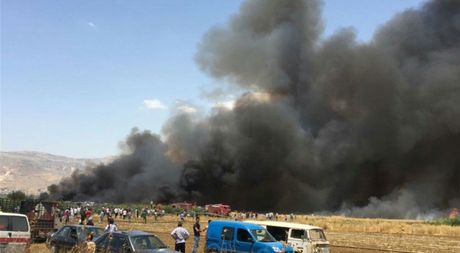 A fire broke out in a Syrian refugee camp in Lebanon’s Bekaa Valley Sunday, killing at least one person and sending large plumes of black smoke into the sky, the state news agency and the Red Cross said.

Ahmed Salloum, a member of the local emergency services, said the fire turned the tent camp near Qab Elias town into “ashes.” He said firefighters and emergency workers struggled for over two hours to contain the fire that broke out around midday. Temperatures are soaring in Lebanon’s Bekaa region, and Salloum, an electricity technician, said he suspected an overload of power was to blame.

“The settlement has turned to ashes. Even the iron melted,” Salloum said.

Only the bathrooms at the edge of the settlement were left standing. The explosion of gas canisters could be heard from a distance.

George Ketteneh of Lebanon’s Red Cross said initial reports indicate that over 100 tents burned down and one person died.

Ketteneh told The Associated Press that about 97 families, or an estimated 700 persons, live in the informal settlement. He said at least six were wounded.

Lebanon is home to over 1 million registered Syrian refugees, who reside largely in settlements in Lebanon’s Bekaa Valley, near the border.

The fire comes two days after Lebanese authorities rounded up nearly 400 Syrian refugees following an attack on military troops conducting raids in refugee camps in Arsal, another town near the border with Syria.

The authorities said the raids followed a tip that a terrorist attack was planned out of the camps. But Syrian activists and refugees criticized the raids, saying the mass sweep was excessive and that detainees were abused. The Lebanese military denies the allegations of abuse.
ABC