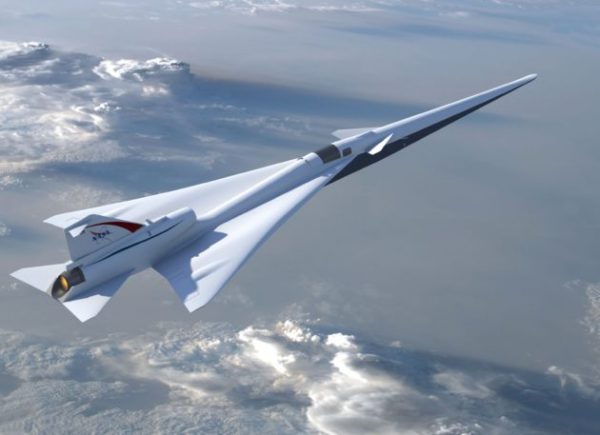 NASA says it’s cleared a significant milestone on the path to reviving supersonic passenger jet travel in the U.S. with the completion of the preliminary design review for its low-boom experimental airplane.

The Low-Boom Flight Demonstration X-plane, or LBFD, is designed to create a soft “thump” rather than the loud sonic boom typically associated with supersonic airplanes. The boom is what led federal authorities to ban supersonic passenger flight over land in 1973.

The initial design stage for the LBFD is known as Quiet Supersonic Technology, or QueSST. NASA’s plan, drawn up with Lockheed Martin as the lead contractor, calls for transforming QueSST into the LBFD and flying the plane over communities to collect the data that regulators would need to ease the ban.

Last Friday’s preliminary design review was a key step in the process: Experts and engineers from NASA and Lockheed Martin checked the plans drawn up earlier in the year and determined that the QueSST design would be capable of fulfilling the plane’s mission objectives.

“Managing a project like this is all about moving from one milestone to the next,” David Richwine, manager for the design effort under NASA’s Commercial Supersonic Technology Project, said in a news release. ” “Our strong partnership with Lockheed Martin helped get us to this point. We’re now one step closer to building an actual X-plane.”

Other steps have been taken as well: Last month, a scale model of the design wrapped up testing in an 8-by-6-foot supersonic wind tunnel at NASA’s Glenn Research Center in Cleveland. And at last week’s Paris Air Show, NASA and Honeywell announced the completion of a two-year study to test an avionics system that could help the LBFD’s pilots minimize the impact of sonic thumps.

Now that the preliminary design has been approved, NASA and Lockheed Martin will fine-tune the design, based on the results of further performance tests and wind tunnel tests. Then NASA will solicit proposals for building the piloted, single-engine plane. Although Lockheed Martin has been the lead contractor for the early design phase, the follow-on contract will be awarded in an open competition.

The schedule calls for the contractor to be selected early next year, with flight tests beginning as early as 2021.

Meanwhile, commercial ventures such as Boom Aerospace, Spike Aerospace and Aerion are moving ahead with their own plans to test supersonic planes. At the Paris Air Show, Boom announced that it had 76 orders for supersonic planes from five airlines, and that it planned to fly a demonstrator aircraft late next year.