Cyprus peace talks open in Swiss Alps. Could be the last chance for a settlement 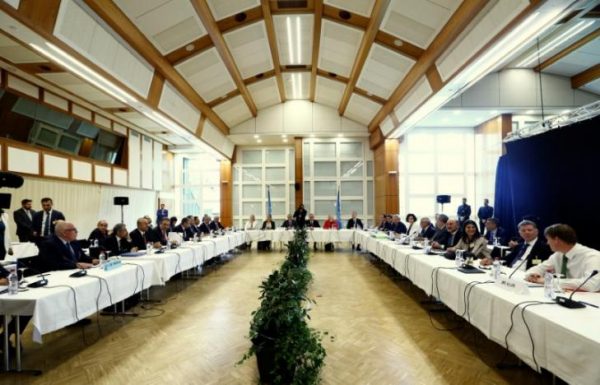 Overview at the start of the peace talks on divided Cyprus, under the supervision of the United Nations in the alpine resort of Crans-Montana, Switzerland June 28, 2017. REUTERS/Denis Balibouse
Share:

Rival Greek Cypriot and Turkish Cypriot leaders began talks on Wednesday aimed at reuniting the divided island after more than 40 years, needing to overcome prickly issues in what some fear could be the last chance for a settlement.

Each side put forward its position on security and the future role of guarantor countries.

The talks involve the guarantors — Greece, Turkey and Britain — but British Foreign Secretary Boris Johnson and Foreign Minister Alan Duncan left by helicopter before the talks had officially opened to head home for a parliamentary session.

Eide said on Tuesday that he had expected the foreign ministers to stay this week, but Johnson and Duncan left on Wednesday morning after taking part in preliminary meetings and a working dinner on Tuesday night.

Britain has a minority government and lawmakers like Johnson and Duncan are needed at home to keep it in power.

“UK support for a settlement of the Cyprus issue remains steadfast and the UK will continue to be represented during the Conference on Cyprus in Switzerland,” a British Foreign Office spokeswoman said.

Cyprus was split in a Turkish invasion in 1974, triggered by a brief Greek-inspired coup. Turkey supports a breakaway Turkish Cypriot state in northern Cyprus.

The negotiations on the long-running conflict are the best chance, but maybe not the last one, for the estranged sides to get an agreement, Eide said on Tuesday.

The United Nations is seeking a peace deal uniting Cyprus under a federal umbrella and which could also define the future of Europe’s relations with Turkey, a key player in the conflict.

Two issues are vexing: Turkish Cypriot demands for a rotating presidency, and Greek Cypriot demands that Turkey pulls all its 30,000 troops off the island, and renounces its intervention rights.

In a statement, the group “Unite Cyprus Now” welcomed the summit “in what we fear could be the last chance to reunite our island”.

It called on Anastasiades and Akinci “who have made unprecedented progress in the negotiations to find a comprehensive solution to the Cyprus problem, to show the necessary leadership and courage to end the longstanding division – a division that blights our children’s future and limits the enormous potential of our beautiful island”.

The leaders should find “mutually acceptable solutions to the security and guarantees question”, it said.