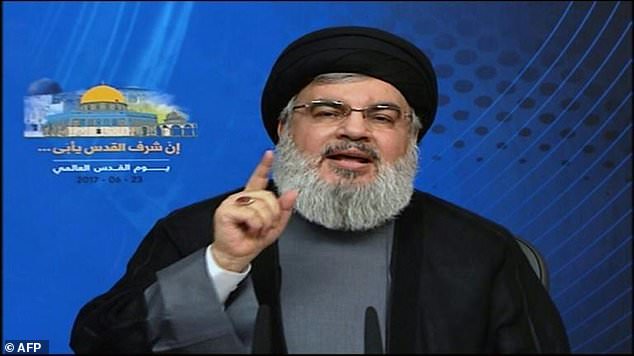 Hezbollah leader  Hassan Nasrallah said on Friday that a future war waged by Israel against Syria or Lebanon could draw thousands of fighters from countries including Iran and Iraq.

His comments indicated that the same array of Iranian-backed Shi’ite militias – but not countries – currently fighting in Syria in support of President Bashar al-Assad could take part in any future conflict with Israel.

Tensions have risen between Hezbollah and its longtime foe Israel in recent months since Donald Trump became U.S. president with his tough talk against Iran. Israel’s air force chief said his country would use all its strength from the start in any new war with Hezbollah.

“The Israeli enemy must know that if an Israeli war is launched against Syria or Lebanon, it is not known that the fighting will remain Lebanese-Israeli, or Syrian-Israeli,” Nasrallah said in a televised speech to mark Jerusalem (Quds) Day, an annual show of solidarity with the Palestinians.

The commemoration was first launched by Ayatollah Ruhollah Khomeini, the late revolutionary leader of Iran — a main sponsor of Hezbollah .

“This doesn’t mean there are states that might intervene directly. But this could open the way for thousands, even hundreds of thousands of fighters from all over the Arab and Islamic world to participate – from Iraq, Yemen, Iran, Afghanistan and Pakistan,” he said.

Nasrallah has repeatedly warned Israel against attacking Lebanon, where the Iran-backed Shi’ite group is based, and from where it sends fighters to support Assad against insurgents.

Experts on the group say the warnings are part of a policy of deterrence that has also included revealing some of its military capabilities  .

Nasrallah said in recent months Hezbollah’s rocket arsenal can hit any military target in Israel, which is Lebanon’s southern neighbor.

He said any Israeli war with Lebanon or the Gaza Strip, which is run by the Palestinian Islamist movement Hamas, would be “very costly” and that Israel would not be able to win.

Israel has targeted senior Hezbollah commanders in air raids on Syrian soil. The Shiite militant group and Israel have fought many battles including a devastating 34-day war in 2006 that killed 1,200 people in Lebanon, mainly civilians, and 160 Israelis, mostly soldiers.

Turning to the Saudi-Iranian tensions, the Nasrallah  said “the Saudi regime is too weak and impotent to be able to wage a war on Iran.”

“Iran, as the main backer of resistance movements in the region, is facing political pressures and economic sanctions aimed at isolating it. The new isolation attempts started at the Riyadh summit with the aim of bringing the war to Iran through the takfiris,” Nasrallah noted.

“The new Saudi crown prince had threatened to bring the war to Iran and this means using the Wahhabi, takfiri groups to target Iran,” he added, linking Crown Prince Mohammed bin Salman’s remarks to the unprecedented bombings in Tehran earlier this month that were claimed by the jihadist Islamic State group.