50 years of occupation: The lonely journey of a Palestinian cancer patient 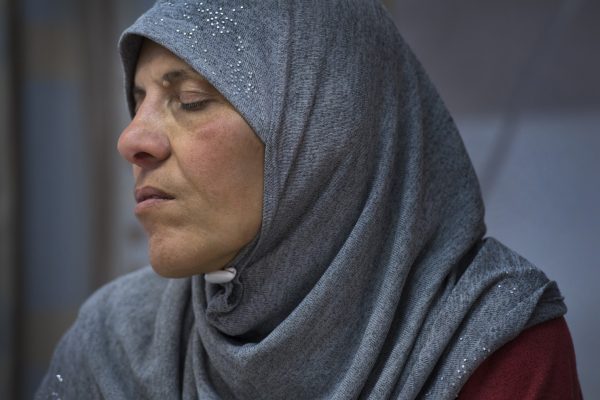 “My treatment is not available in the West Bank,” Maweya Abu Salah said. “It should be, but I don’t know why.” (Linda Davidson/The Washington Post)
Share:

The patient in Room 120 was struggling, you could see right away, on what her oncologist called “the cancer journey.” She was three long years into this trip.

Today she felt a pain jabbing its fist into her right side. But Maweya Abu Salah was not done yet. She was a mother who wanted to see her children again.

“I just feel a little down,” she told us. “Come, come. Sit down.” She arranged herself under the bedspread.

Outside her window at the Augusta Victoria Hospital in East Jerusalem, the spring flowers were in epic bloom. She praised God and her nurses. She was going home, if not today, in a day or two, she said.

Salah was quick to tell anyone who passed by about her kids: the accountant, the chemist, the math teacher. And the youngest, just 13 years old, a blessing, a handful.

The children wanted to be by her side. One son applied for a permit to accompany his mother to the hospital but was refused, Salah said. Another son was in Jordan and denied entry into Israel. In the days to come, her eldest daughter tried, too, but was turned away.

The lonely journey of a Palestinian cancer patient https://t.co/l9asBUlDDo pic.twitter.com/IbaPa7hGez

They were Palestinians stuck on the other side of Israel’s borders and barriers.

One of her doctors told us, “This happens every day.”

Only Salah’s husband of 34 years had a permit to come to the hospital and spend the night. He was alone, too, on his own journey, catnapping by his wife’s bed in a vinyl recliner, or pacing the corridors after midnight, when all was still, except for the beeping of machines.

“I need the kids here as much as she,” Jamal Abu Salah said.

There are many ways to tally the human costs of the Israeli occupation, which began 50 years ago in June.

Israel has faced rockets and three wars with the Islamist movement Hamas in Gaza, whose members deny Israel’s right to exist. Israelis endured two Palestinian uprisings, the second marked by suicide-bomb attacks against civilians. More recently there was a wave of knife and vehicular assaults. Thousands of Israelis have died in Palestinian attacks. This is why Israelis say they need walls and permits.

On the other side, Palestinians in 2017 live their lives under a cone of control that they say Israelis or Americans would rebel against.

There are checkpoints, walls — and more than a hundred kinds of permits that a Palestinian needs to enter Israel.

Permit is a bloodless term. An automobile needs a permit. What is a permit for a Palestinian?

Israel annexed East Jerusalem years ago. Palestinians consider this half of the city “occupied territory.” Israel says all of Jerusalem is theirs — “eternal and undivided.”

Left unsaid is the fact that Palestinians come to Israel because health care in the West Bank is substandard. It’s even worse in the impoverished Gaza Strip, which suffers from strict trade and travel restrictions imposed by Israel and Egypt and is ruled by the Islamist militant movement Hamas, a terrorist organization.

Last year, the Palestinian Health Ministry sent 4,500 patients from the West Bank and Gaza to Israeli hospitals. It sent an additional 20,000 to the six hospitals in East Jerusalem, institutions such as Augusta Victoria Hospital, a 120-bed facility run by a Lutheran charity and staffed by Palestinians.

Walid Nammour, director of the Victoria hospital, told us, “Believe me, we would go to the moon to get our people the care they need.”

Nammour praised Israeli doctors. He called an Israeli medical coordinator, “who works round the clock” to help get medical permits for his Palestinian patients, “a saint, an angel.”

Nammour said the cooperation between Jewish, Christian and Muslim medical workers is a model for how to put aside decades of hatred and suspicion, and to make peace together.

“As a Palestinian, I feel discriminated against everywhere I go, but never in an Israeli hospital,” he said.

But all was not right.

“Everything comes back to the occupation,” Nammour said.

A permit to get chemotherapy

We met Maweya Abu Salah on a Sunday afternoon in April, tagging along with one of her oncologists on his rounds.

Salah had just turned 51. She was waiting for an oxygen bottle, but pleased to have visitors because visitors are rare.

To come to Victoria hospital for treatment, Salah and Palestinians in the West Bank and Gaza need two things. They must get a referral from the Palestinian Health Ministry, which is essentially a promise to pay for services rendered — a cumbersome process. They also need a travel permit from Israel’s military and intelligence authorities. Patients, especially those from Gaza, are sometimes required to submit to interviews with Shin Bet intelligence officers before getting a permit.

The Israelis can refuse permits to younger family members, especially males, for security reasons. Doctors at the Victoria hospital said sometimes even mothers and fathers can be denied permits to accompany their sick children.

“These are the saddest cases,” the director said.

For what would be her last admission, Salah and her husband first traveled from their home in the northern West Bank by car, then bus, crossing from the West Bank to Israel via the Qalandia checkpoint, from Ramallah into Jerusalem, then another bus and finally a taxi to the hospital.

“If the situation was normal, we’d just take the family car,” Salah said. “But this is our life, what can you do? We have to thank God for what we have.”

Salah did not want to complain. But she did want to make one point. “I will say that the thing that exhausts me the most is the back and forth.”

One of her doctors, in English, whispered to us, “You know that this is an end-stage cancer patient making these crazy bus trips, right?”

He looked at Salah, smiled and said in Arabic, “She refuses to use the wheelchair!”

Three years ago, Salah felt a mysterious ache and went to the Palestinian Authority’s public hospital in Jenin. A Palestinian doctor performed an ultrasound. There was something suspicious about the right kidney.

A foreign surgical team visiting Jenin “opened me up and then sewed me back up,” she said.

It was not until Salah was awarded a medical permit by the Israeli military to travel to a hospital in Tel Aviv that a definite diagnosis was reached. The Israelis performed a PET-CT scan and did a biopsy that confirmed kidney cancer.

“They were very nice to me,” she remembered.

Three months later, Salah was given a referral and another Israeli permit to go to St. Joseph’s Hospital in East Jerusalem, where Palestinian surgeons removed her cancerous kidney.

Then she began her treatment here at Victoria hospital, where doctors had access to the latest drug therapies.

The Palestinian Health Ministry reports that half the medical patients from Gaza were denied access to Israel and East Jerusalem last year, while almost all the patients from the West Bank were accepted, though sometimes after lengthy delays. Israeli officials say they try to facilitate essential medical visits. They issued almost 112,000 permits to Palestinian patients last year. But they say they carefully watch whom they allow to accompany the patients.

“My treatment is not available in the West Bank,” Salah told us. “It should be, but I don’t know why.”

She said, “I will say it, health care in the West Bank is really not so good.”

This was the last time we would see Salah conscious.

A dire lack of options

In many ways, Israel’s modern medical miracle helped Salah survive. But the occupation also threw obstacles in her path.

Her primary oncologist, Yousef Hamamreh, was trained by Israeli mentors at nearby Hadassah Medical Center, which is considered one of the leading medical centers in the world. Palestinian doctors at Victoria confer often on cases with their Israeli counterparts.

There are just seven Palestinian oncologists in East Jerusalem, and six in all of the West Bank, including two about to retire. There are three in Gaza. That’s it.

“This for a population of over 4 million people,” Hamamreh said, for all the West Bank and Gaza. “This is not right.”

When we spoke in his basement office, he made cups of strong coffee and unplugged the phone on his desk, which had been ringing and ringing.

Hamamreh said there are no PET-CT scanners in the West Bank or Gaza, because the Israelis will not allow them. The scanners, which have revolutionized medicine in the past decade, produce radioactive byproducts that Israeli security forces fear could be handled improperly or even deployed by terrorists in a dirty bomb.

And so radiation therapy is not available for cancer patients in the West Bank and Gaza, for the same reason as the PET scanners, which means that every woman who needs radiation for breast cancer or man for a malignant prostrate must secure permits.

Chemotherapy is a different challenge.

Hamamreh said many widely prescribed cancer drugs are not readily available in the West Bank, because the Palestinian Authority does not pay its bills.

“It’s much worse in Gaza,” he said. “Their shelves are empty.”

There are no targeted biological agents, either, no immunotherapy, all tools of modern cancer treatment.

Hospitals in Jordan and Egypt no longer accept patients referred to them by the Palestinian Authority, because they are not reimbursed.

In the past two years, U.S. taxpayers have paid off $60 million of the Palestinian Authority’s debt to the East Jerusalem hospitals. Earlier this month, the Victoria hospital threatened to stop taking new referrals, including cancer patients, because the Palestinian government owed it $40 million.

Nammour said: “The money is there. But it’s not their top priority.”

On Wednesday, three days after our first visit with Salah, we found doctors at her door.

“If she were an Israeli, I would have released her for palliative care, for end-of-life management. She’d get home visits, by a social worker, a psychotherapist, oncology nurse, a dietitian,” said Wasim Sharbati, one of her doctors.

It was too late now.

Her husband, Jamal, stood a few feet away.

He is 62 and has spent his life constructing homes, hotels and offices for the Israelis. The day before his wife fell into unconsciousness, he had rushed back and forth from a work site in Tel Aviv, under a different permit, one for work.

His nails were still caked with plaster dust.

“We were wishing to go home,” he said.

His wife lay on the bed, making a gurgling sound.

Jamal combed her hair. He felt her forehead. He smoked outside and paced inside. He made phone calls. It was all very sudden. There was no time to bring his children across.

“This is not fair. Her kids should be here,” Jamal Abu Salah said.

That night, Jamal said his wife suddenly stirred and spoke to him. She seemed frightened and confused.

She asked her husband why her grandchildren had come to the Israeli checkpoint alone. Of course, they had not, this was just a dream or a delusion. The grandchildren were toddlers. They were at home.

Jamal said his wife, at her last moments, was not seeing angels but Israeli soldiers.