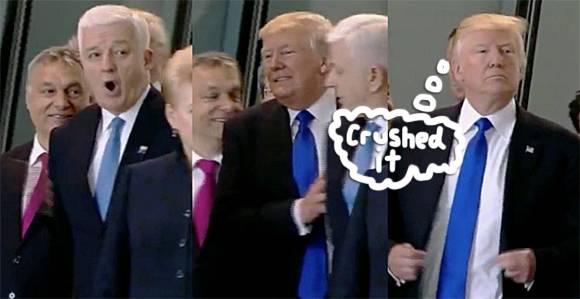 President Donald Trump’s body language during his visit to Brussels on Thursday was about as subtle as a politician body slamming a reporter. For America’s closest allies, in town for a major meeting of NATO, the actions and words of the new US President were visibly troubling. For Vladimir Putin, who surely paid close attention from Moscow, the day was filled with pleasing images and satisfying rhetoric.

The moment that best encapsulated Trump’s day came after the speeches, when NATO leaders were taking a tour of the Alliance’s brand new headquarters. Trump fell back into the pack, but worked his way forward, pushing aside the Prime Minister of Montenegro Dusko Markovic to put himself in front.

This was Markovic’s and Montenegro’s first NATO summit. The tiny Balkan country has just been accepted into the alliance, much to Moscow’s chagrin.

Authorities in Montenegro say they stopped a Russian-backed plot to kill Markovic’s predecessor, which was aimed at preventing Montenegro from joining NATO. They have arrested 14 people, including two Russians. (Russia denies involvement.) The plot, prosecutors say, sought to install a new government loyal to Russia and opposed to Montenegro’s efforts to grow closer to the West and to NATO. The plot failed, and now Montenegro is becoming NATO’s 29th member.

Pulling the Montenegrin leader back and bullying his way to the front was only one of Trump’s odd displays in Brussels. He performed his overwrought handshake with French President Emmanuel Macron, yet another in a strange history of alpha-male greetings.

But body language was the least of it.

The part of Trump’s visit that must have truly pleased Putin came in his speech.

Normally, a NATO summit is an opportunity for reinforcing the bonds and commitments between members of an alliance that has kept America and much of the Western world safe since World War II. And this summit comes when the alliance is under pressure. Russia has been expanding its borders, capturing and annexing territory from a neighboring country and intimidating NATO members. In addition, Moscow is interfering in elections across Europe and the United States.

Above all, Putin is trying to divide NATO in order to weaken it.

Trump should have reassured America’s allies that the United States remains fully committed to NATO. Allies wanted Trump to say that he unconditionally stands by NATO’s Article 5, the principle that when one member is attacked, all members will come to its defense. Article 5 has been invoked only once in NATO’s history, after 9/11.

But, no, Trump did not mention America’s commitment to Article 5. Instead, in front of a monument honoring the 9/11 victims, Trump gave a dismal speech, scolding America’s allies, telling them they should spend more money on defense, an issue that has been addressed in the proper forum and is in the process of being resolved.

The entire event was surely a hit in Moscow. In Brussels, however, concerns are growing. After meeting with Trump, European Council President Donald Tusk noted, “I am not 100 percent sure that we can say…. that we have a common position, a common opinion, about Russia.”

It was left to German Chancellor Angela Merkel, standing before a segment of the old Berlin Wall, to remind the audience that it’s “not walls that will be successful, but open societies that are built on common values.” Trump probably heard the word “wall” in there, but not much more