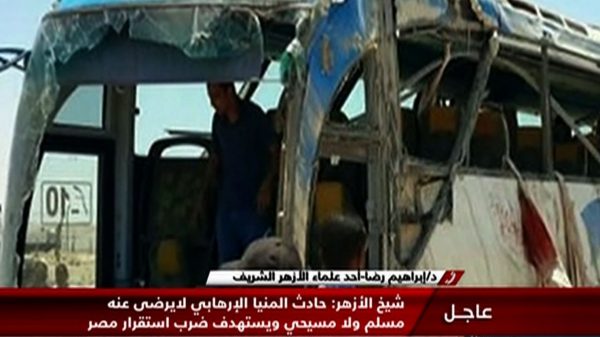 There was no immediate claim of responsibility. But the Islamic State has claimed links to previous attacks against Egypt’s Christians, who make up about 10 percent of the population.

The attack also took place on the eve of Islam’s holy month of Ramadan, a time when some militant factions have stepped up attacks in the past.

The ambush — in the Minya region about 150 miles south of Cairo — underscored the increasing pressures on Egyptian forces as Islamist militants gain greater footholds around the country, undercutting Egypt’s vital tourism industry and forcing greater security for Coptic Christians and others targeted by militants.

The Minya governor, Maj. Gen. Essam el-Bedewey, said at least 28 people were killed and at least 25 were wounded when the attackers fired on the bus heading for the St. Samuel Monastery, one of several pilgrimage sites in an area that is home to a large portion of Egypt’s Christian population.

The Reuters news agency and other reports said children were among the dead.

A member of the region’s security department, Maj. Mohamed Abdel-Moneim, told reporters that about 10 men wearing military-style gear carried out the attack.

In late April, Pope Francis visited Egypt as part of Vatican outreach to Egypt’s embattled Christians, whose community dates back to the early centuries of the faith. But the papal trip also brought denunciations from Islamist militants and warnings of further reprisals.

In December, a bomb hit the main cathedral in Cairo, killing 25 people as part of what is being described as a new strategy by the Islamic State to target Christians.

Christians have been generally supportive of Sissi’s military-backed government, but have become increasingly critical of the inability of the country’s security forces to protect their places of worship.

“The state is doing its best, but we need more efforts,” Minya’s Coptic Bishop Makarios told The Washington Post. “They [security forces] are always present and on guard after the attack takes place, and keep their security measures tightened for a short while after. . . . What we need is real effort exerted to ensure this is not repeated, not just solidarity and compassion.”