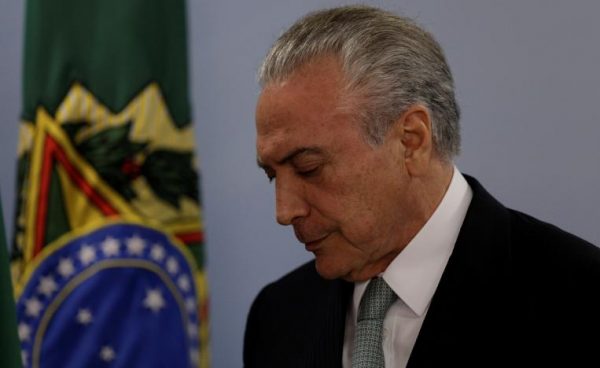 Brazil’s President Michel Temer reacts as he speaks at the Planalto Palace in Brasilia, Brazil, May 18, 2017. REUTERS/Ueslei Marcelino
Share:

Brazilian President Michel Temer, facing growing calls for his resignation over a corruption scandal, said he would not step down even if he was formally indicted by the Supreme Court.

“I will not resign. Oust me if you want, but if I stepped down, I would be admitting guilt,” Temer told Folha de S.Paulo, Brazil’s biggest newspaper, in an interview published on Monday.

Brazilians who have become inured to a massive, three-year corruption investigation were shocked last week by the disclosure of a recording that appeared to show Temer condoning the payment of hush money to a jailed lawmaker.

The scandal has threatened to tear apart Temer’s coalition in Congress and leave Latin America’s largest economy adrift as the president fights for his political survival, just a year after the impeachment of his predecessor.

The Supreme Court has opened an investigation into the revelations that were part of plea bargain testimony by the billionaire owners of meatpacking giant JBS SA (JBSS3.SA).

The court had been expected to decide this week whether to suspend the investigation at Temer’s request until it could be determined if the recording of his March conversation with JBS chairman Joesley Batista was doctored to implicate the leader.

But Chief Justice Carmen Lucia ruled on Monday that the court would not take up the recording issue until Brazil’s federal police finished their examination of the tape and determined if it had been edited, possibly making it inadmissible as evidence in the investigation.

Shortly after, Temer’s lawyers said they had dropped their request that the investigation be suspended, given the court’s decision that the tape must be evaluated.

Ricardo Molina, a private expert Temer’s team hired to examine the tape, told reporters on Monday that the recording had clearly been edited and should not be accepted as evidence.

The investigator said he had found at least 70 points of “irregularities” in the 38-minute recording, such as moments where the audio was “clipped,” or when the voice of Temer was unintelligible.

Regardless, the head of Brazil’s powerful national bar association, which is calling for Temer’s impeachment, said plea-bargain testimony by JBS executives included more evidence against the president than just the recording. Claudio Lamachia told reporters that even Temer’s meeting with Batista, who was under corruption investigations, was unacceptable.

The Brazilian Social Democracy Party (PSDB), Temer’s biggest ally in the governing coalition, put off a meeting on Sunday to decide whether to continue supporting the beleaguered president.

Party officials said on Monday the PSDB would wait until the Supreme Court ruled on whether to continue an investigation of Temer.

“I AM NOT DOOMED”

The president, who took office a year ago after the ouster of former running mate Dilma Rousseff, has come under unrelenting pressure to step down and let Congress elect a new president for the remainder of his term.

Still, Temer maintained a confident outlook, telling Folha he was “absolutely” sure he was capable of finishing his term through the end of 2018 without giving up on his legislative agenda, which includes an ambitious overhaul of the country’s labor and social security regulations.

His coalition had already been struggling to muster the votes for the unpopular social security reform. Financial markets, which had largely anticipated approval of the reforms, slumped last week when the scandal broke.

S&P Global Ratings threatened to downgrade Brazil’s rating further into junk territory over the next three months if political turmoil hampered the advance of economic reforms.

The Brazilian real extended losses on Monday morning, weakening more than 1 percent. Yields on interest rate futures were up, indicating a deep rate cut by the central bank at the end of this month has become less likely as uncertainty grows.

“I will demonstrate political strength in coming weeks precisely by putting important bills to vote (in Congress),” Temer told Folha. “I am not doomed.”

Temer said the recording was not proof of wrongdoing and he did not report the vague references to bribery of officials because he did not believe them. “Joesley is a loudmouth,” Temer said.

“I have shown, with relative success, that what that businessman did was to induce a conversation,” the president told Folha, acknowledging that he had been wrong to make no record of his meeting with the businessman in the official ledger of visitors.