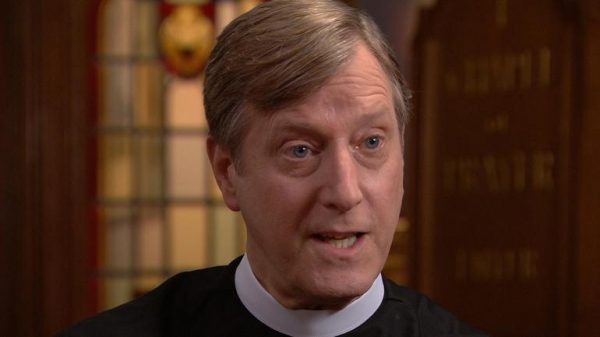 Rev. Robin Hynicka and his congregation are providing shelter to an illegal immigrant. CBS NEWS
Share:

There is a peaceful rebellion growing against federal immigration law and the interpretation of that law by the Trump administration. More than 800 houses of worship across the country have volunteered to shelter illegal immigrants and their families who face deportation — daring federal agents to step through their stained-glass doors.

The churches and synagogues are joining more than 600 cities and counties that have declared themselves sanctuaries—ordering their police not to detain people if it’s only because of their immigration status. In no other venue of the law has so much of the nation stood in defiance of Washington.

Rev. Robin Hynicka: We are a sanctuary church.

And a 155 years later, Reverend Robin Hynicka is on the same chapter and verse.

Rev. Robin Hynicka: My baptismal covenant, there’s a vow that’s taken either on my behalf when I was baptized as a child or as an adult, that I would take the power and the freedom that God gives me to resist evil, injustice, and oppression in whatever forms they show themselves.

Scott Pelley: Well, in your view what is this, evil, injustice, or oppression?

Rev. Robin Hynicka: It’s injustice and oppression, all of which is evil. Yeah, when a human being’s human rights are denied, when they can’t stay with their family, when they can’t work, when they can’t participate in the community in which they have deep roots, all of those apply.

He’s talking about Javier Flores Garcia who has lived in the church basement for six months. He came from Mexico, illegally in 1997. He’s a landscaper with a decade-old DUI on his record. His other offense is crossing the border repeatedly. A judge ordered him deported but he moved here rather than leave his three children who were born citizens.

Javier Flores Garcia: I think you have to keep fighting and I’m doing this for my kids. And I would do it again if it became necessary.

Rev. Robin Hynicka: We’re taking a leap of faith, right, in many respects, because we don’t know what’s going to happen.

Federal agents can arrest Flores in the church, but U.S. Immigration and Customs Enforcement, known as ICE, has a decades-long policy of avoiding places of worship, schools and hospitals.

Daniel Ragsdale: My advice would be they should come out of the basement of the churches and follow the law.

Daniel Ragsdale is deputy director of ICE. He runs the daily operations and oversees 13,000 officers.

Scott Pelley: Checking in with ICE is gonna get them deported.

Daniel Ragsdale: Checking in with ICE will follow the law. And in cases where there’s a removal order, of course we would execute it.

Scott Pelley: How much concern do you have about separating families in deportations?

Daniel Ragsdale: As a human being, I know it is traumatic for folks. But I will also say that the rule of law is something that America is built on. But this seems to be the one area where the narrative about separating families, you know, sort of gets a little bit ratcheted up.

Scott Pelley: Well, you can understand why.

Daniel Ragsdale: Well, I can. But I would suggest that every person who has, you know, come to the United States illegally, just like if I went somewhere and, you know, resided in violation of law, I could expect at some point that sovereign country to want to remove me.

Trump: We’re rounding ’em up in a very humane way, in a very nice way. And they’re gonna be happy because they wanna be legalized.

Before the election, candidate Trump told us he would deport all of an estimated 11 million illegal immigrants.

President Trump: You see what’s happening at the border, all of a sudden for the first time, we’re getting gang members out, we’re getting drug lords out. We’re getting really bad dudes out of this country. And at a rate that no one has ever seen before and they are the bad ones.

It’s not just the bad guys. The fact is in the Trump administration, according to ICE, about 11,000 undocumented people with no criminal records have been detained so far—that’s twice as many as last year. Because of this, the number of religious institutions across the country offering sanctuary has doubled to 800.

Just last week this church in Buffalo, New York, offered sanctuary to a family of six from Honduras. The church has opened its doors to 40 illegal immigrants since January. When congregations in cities including Phoenix, Denver and Philadelphia give sanctuary, they are in open defiance of immigration law.

Scott Pelley: That leads me to wonder whether there’s any internal conflict within you. I mean, you preach morals and yet you’re breaking the law.

Rev. Robin Hynicka: There’s no conflict. I think– I’ve said this before that when a law breaks the backs of God’s people then it’s time for us to think about breaking those laws.

When a law breaks the backs of God’s people then it’s time for us to think about breaking those laws: Rev. Robin Hynicka

Trouble is, those laws never stop changing and that is one reason the immigration debate is never settled. Since 1790, Congress has rewritten immigration law, on average, about every four years. America imported Chinese labor to build the Transcontinental Railroad. And when it was finished, Congress banned all Chinese. In World War I, nearly 20 percent of U.S. forces were not citizens. In World War II, America begged more than four million Mexicans to come to work. And in 1986, Ronald Reagan granted amnesty to illegal immigrants.

Trump: Day One, my first hour in office, those people are gone.

Mr. Trump blames immigrants for violence. He often fired up his rallies by raising the murder, by an illegal immigrant, of a woman in San Francisco, a sanctuary city. But according to the Department of Justice, the incarceration rate for illegal immigrants is one-third that of citizens.

Jim Kenney: To lay criminality at the feet of immigrants is not only morally unfair, it is factually wrong.

One of Jim Kenney’s first acts as mayor was to declare Philadelphia a “sanctuary” which means his police do not ask about citizenship and will not hold illegal immigrants if the only reason is that ICE wants to deport them. He says it violates the constitution to hold people without a warrant.

There are more than 600 cities, counties and states that consider themselves sanctuaries. Two years ago there were half as many.

President Trump is now trying to cut off federal funds from these sanctuary cities. But he’s been stopped so far by the courts.

Jim Kenney: This is not a us versus them. This is we upholding the Constitution of the United States of America and asking them to comply with it also by presenting us with a proper judicial warrant so we can release that person to their custody.

Scott Pelley: The Feds are talking about taking your federal money away. And Mr. Mayor, I bet you can’t afford that.

Jim Kenney: No. But think about the conundrum that this presented. If you accept the assertion that undocumented immigrants cause crime, which I do not accept, and I think it’s wrong, why would you defund police departments?

Scott Pelley: There are people shouting at the television right now saying, “If they came illegally, they shouldn’t be here. It’s a terrible thing, but they shouldn’t have come.”

Jim Kenney: Well, you know, Ellis Island had opened in 1892. The bulk of Irish Diaspora came to America in the 1840s. We didn’t have papers either. We were undocumented. There was an anti-Italian slur, when I was growing up in my neighborhood called W-O-P—that’s without papers. If you come to the country without documents because you’re starving in your country or you’re being held hostage by drug dealers or you’re afraid your children are gonna be shot in the streets or on their farm, I think that that’s self-preservation and self-survival. And any group of people would flock to America because that’s been the historic place where people came to be saved.

Sixto Paz: This is my country. I’m working hard.

Sixto Paz would have been deported 10 months ago if he hadn’t confined himself to Shadow Rock United Church of Christ in Phoenix. Ismael Delgado moved in four months ago.

Ismael Delgado: We came to work.

Paz crossed illegally in 1985. Under the policy of President Reagan he was granted a work permit, which was revoked under the policies of George W. Bush. His four children are citizens by birth. His youngest is five.

Sixto Paz: I spent 32 years over here, and I don’t wanna leave him alone. And I paid my taxes for 28 years.

Scott Pelley: There are people watching the interview who are saying, you shouldn’t have come here.

Sixto Paz: When someone, you’re hungry, you not have a job, you not have money. What are you gonna do? I not come to United States to take vacation, man. I’m here because I had to. I’m come over here, and I respect all the law, I respect the people, I’m working hard to do the best. I’ve got a clean record. And I learned a lot over here, I learned a language. It’s not, I don’t speak very well, but I’m working on that. And my son, my daughters, they’re professionals.

Scott Pelley: You have two older daughters who are medical assistants?

Scott Pelley: They both graduated from college here in the United States?

Scott Pelley: If the priority is serious criminal offenders, why are we seeing deportation orders for little old ladies and middle-aged men who’ve never committed a crime?

Daniel Ragsdale: That’s a great question. So if someone who was placed in removal proceedings goes through that entire process, again, all at taxpayer expense, and gets a removal order, if we encounter that person and that order has been litigated and challenged and due process has been met, it’s odd that anyone would expect us to simply ignore all those decisions by lawyers, by judges, by federal court judges in some cases, and simply say, “We’re gonna make policy on the street and ignore it.”

Scott Pelley: One of the changes in the guidance from the Obama administration to the Trump administration is that President Trump’s executive order prioritizes the removal of those who entered illegally. Well, that’s everybody. That’s 11 million people.

Daniel Ragsdale: Well, we only have the same size workforce. There’s just no way that that could simply be done in any rapid fashion, which is why we are still focusing on the folks that I talked about, which are people that present the greatest risk to public safety.

Rev. Robin Hynicka: Javier embodies the spirit of sanctuary. He and we together are sanctuary.

Scott Pelley: Do you worry that the government might take steps against sanctuary congregations across the country?

Rev. Robin Hynicka: I do worry about that. I think it would be a huge breach of the age old traditions of providing at least having some place in our civil society where there is, there is an opportunity to challenge laws, and policies, and procedures that are creating more injustice than they are creating justice.

In rare cases, ICE officers have made arrests near schools and churches. A man was arrested in California dropping his child at school, and in Virginia, several illegal immigrants were arrested shortly after walking out of this church—leaving many to wonder where are the lines once the border’s been crossed?

Daniel Ragsdale: Those are the laws that Congress has passed. I don’t think it’s anybody’s question that if you don’t have lawful status that at some point you could be removed. And I think that’s something that people should be aware of. And, again, I think the president – when he announced the program, was pretty clear about that.