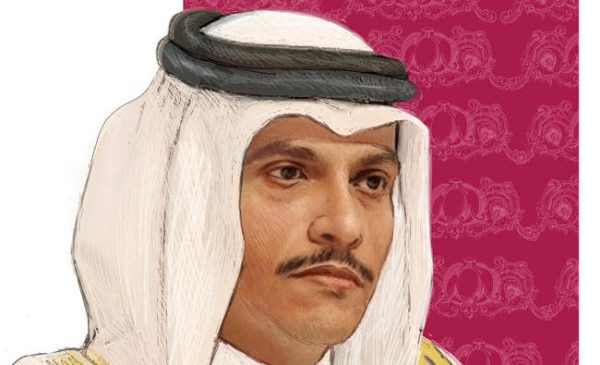 Qatar does not support the Muslim Brotherhood and sees no place for Bashar Assad in the future of Syria, the Gulf nation’s top diplomat told Arab News in an exclusive interview.

The Qatari minister, speaking on the sidelines of the recently concluded Doha Forum, said a “clear strategy” on the Syrian conflict is a must.

“We have seen how (ousted President) Ali Abdullah Saleh in Yemen… allied himself with Gulf enemies who supported him in order to return to power,” Al-Thani said.

“Similarly in Iraq, we saw how (former Prime Minister Nuri) Al-Maliki exited after his sectarian actions, but still remains in Iraq and is equipped and present in some organs of the state. Likewise for Bashar Assad. If he remains president with no power as some propose, or remains an isolated and immune president, this means we will enter into the same tunnel and repeat the same experience, meaning we have not learned from our previous mistakes.

“I add to this the crimes of Assad against his people with no accountability, which means we have opened the door for any leader to carry out such crimes in order to solidify his rule and energy with a political settlement and immunity that protects him from accountability.”

As for what the proposed solution is, Al-Thani said it must also encompass the ongoing issue of terrorism and extremism “so as not to repeat the Libyan experience after the departure of (Muammar) Qaddafi.”

“We must have a clear strategy to solve the Syrian crisis in full. When we talk about a transition stage that ensures sustainability for Syria, we must look at all these sides,” he said.

“The presence of arms is a critical issue that must be resolved before encouraging and guiding Syria to a democratic process and political competition.”’

The Doha Forum discussed the issue of Iranian relations, which was significant given the differences between Doha and other Gulf Cooperation Council (GCC) states vis-a-vis Tehran.

Al-Thani said: “Since the Iranian escalation and the attack on the Saudi Embassy and its burning in Tehran, Qatar has condemned this attack and has withdrawn its ambassador back from Tehran to Doha, where he still remains and is not carrying out his role. Diplomatic relations between Qatar and Iran are no longer the same.”

Al-Thani stressed that Doha does not enter into direct dialogue with Iran without the GCC. “But we are among the Gulf Cooperation Council and have responded positively to Iran’s call for dialogue.”

“As for Qatar’s position and its vision on its relations with Iran, we believe that we must have a positive relationship with Iran and a relationship based on good neighborliness and non-interference in the affairs of others.”

“In Qatar, we have a shared gas field between us and Iran, and one day we will have to deal with it, so how will we do so? This must be in accordance with positive frameworks built and placed by us Gulf countries.”

As for the criticism over the Iranian nuclear deal and the opening of Western relations with Iran, Al-Thani criticized the absence of the Gulf countries in negotiations, over a matter that concerns “our security first.”

As for lifting sanctions, the Qatari foreign minister believes this raises many question marks and that the GCC presence during the negotiations would have answered those questions. Ultimately, he believes the differences with Iran can only be resolved through the negotiation table, which is why he supports the idea of talks between the GCC as a bloc and Tehran.

“In the end, what do we want from Iran? I do not think there are any countries in the Gulf that do not want to have good relations with Iran, but the question remains how to reach to such relations. We do not believe it will be through confrontation,” he said.

Muslim Brotherhood: Terrorist or not?

One of the most disputed issues between Qatar and many other GCC countries is Doha’s alleged support for Egyptian Muslim Brotherhood, which Saudi Arabia, the UAE and other countries label as a terrorist organization. So how does Al-Thani explain the different position held by Doha, which does not classify the group as such?

“The question is whether the data or information that led these GCC countries to classify the organization as such is the same information available to Qatar? No it is not, and thus we have not placed the Brotherhood on the terrorist list because we have not obtained proof that the Muslim Brotherhood present in the state of Qatar are planning terrorist activities against Qatar,” he said.

However, does this mean Doha supports the Muslim Brotherhood? And what interests does Qatar have in backing a group that has been outlawed by some of Doha’s major allies?

“We do not, will not, and have not supported the Muslim Brotherhood, but rather we support any individual that assumes the presidency in Egypt in a clear and transparent manner,” he said.

To illustrate what he means, particularly given the widely held belief that Doha does indeed support the Muslim Brotherhood, Al-Thani gave two examples from his country’s foreign policy with Egypt and Tunisia.

“In Egypt, when the Muslim Brotherhood assumed power, some linked this to Qatar’s support, even though nearly 70 percent of the assistance program provided by Qatar was during the era of (former Egyptian Prime Minister) Essam Sharaf, during the period of the military council, while of the remaining 30 percent, a portion was during time of the Muslim Brotherhood and a portion during the time of (Abdel Fattah) El-Sisi,” he said.

Essam Sharaf was the prime minister of Egypt from March 3, 2011 to Dec. 7, 2011, having been appointed premier following the toppling of Hosni Mubarak.

“With regard to the gas shipments that were agreed upon, three of which were agreed during the era of El-Sisi, add to that Qatari deposits in Egypt. They were not withdrawn, even though we have the right to withdraw them. This all indicates we do not support a specific period of government,” he said.

“Tunis, on the other hand, is currently led by President (Beji Caid) Essebsi, who is among the opponents of the ideology of the Muslim Brotherhood in the Tunisian parliament. Despite this, the Tunisian people elected him and the state of Qatar directed its support to the Tunisian people and believes that Tunisia deserves the support of GCC countries.”

Asked why then has Doha embraced members of the Muslim Brotherhood who fled to Qatar, which has received them despite being wanted in their own countries, Al-Thani said: “The presence of these individuals is as political oppositions, and we have such individuals from several countries, not only Egypt. We do not permit them in Qatar to carry out any political activities or take Qatar as a platform to abuse or attack their own countries.”

In what some observers might assume as a reference to the Palestinian group Hamas — although it must be made clear that the Qatari foreign minister did not mention them by name — Al-Thani said that “there has been a group that tried to carry out political activities in Doha and we informed them that Qatar can no longer host them.”

Asked about the controversial Egyptian-born Muslim Brotherhood scholar Yusuf Qaradawi, who continues to reside in Doha, Al-Thani said: “He is a Qatari citizen who carries the Qatari nationality, and an elderly individual, and thus we cannot inform him to depart Qatar. The Qatari constitution does not allow for the submission of any Qatari citizen to foreign judiciary, be it in an Arab or non-Arab country.”

Finally, asked about the belief held by some that Qatar is not in agreement with fellow GCC states on a number of issues, Al-Thani said: “The GCC organization or system does not require us to have a unified policy on all issues, but when it comes to collective Gulf security, there is consensus as this is common ground and Qatar will not deviate, particularly if the matter concerns the collective security of the GCC states or imminent danger.