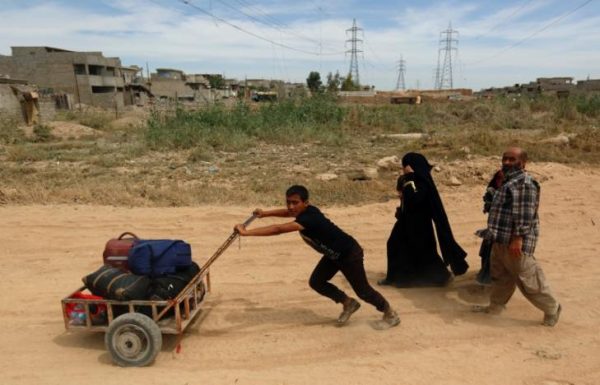 Iraqi forces have dislodged Islamic State from all but 12 square km of Mosul, a military spokesman said on Tuesday, after planes dropped leaflets into the city telling civilians the battle was nearly won.

Seven months into the U.S.-backed campaign, the militants now control only a few districts in the western half of Mosul including the Old City, where Islamic State is expected to make its last stand.

The Iraqi government is pushing to declare victory by the holy month of Ramadan, expected to begin on May 27, even if pockets of resistance remain in the Old City, according to military commanders.

A spokesman for the U.S.-led coalition backing Iraqi forces said the enemy was completely surrounded in the city and its fighters and resources were being destroyed.

“The enemy is on the brink of total defeat in Mosul,” U.S. Air Force Colonel John Dorrian told a news conference in Baghdad.

With the help of advisers and air strikes by the coalition, Iraqi forces have made rapid gains since opening a new front in the northwest of Mosul earlier this month, closing in on the Old City.

The Old City’s warren of densely packed houses and alleys is the most complex battleground and home to the al-Nuri mosque from which Islamic State leader Abu Bakr al-Baghdadi proclaimed a caliphate spanning Iraq and Syria in 2014.

“We reassure everyone that … in a very short time, God willing, we will declare the liberation and clearing of west Mosul and raise the Iraqi flag over … the Old City,” said spokesman Brigadier General Yahya Rasool.”

Outnumbered, the militants have snipers embedded among the hundreds of thousands of civilians trapped in west Mosul. Many people have been killed by militants or heavy bombardments.

The leaflet dropped over Mosul also ordered civilians to immediately stop using any vehicle to avoid being mistaken for militants who have fought back against Iraqi forces with suicide car bombs and motorcycle bombs.

“Our airforce and Iraqi military planes will strike any vehicle that moves on the streets of these districts from the evening of May 15 until their liberation,” read a copy of the leaflet seen by Reuters. “The decisive hour has approached”.