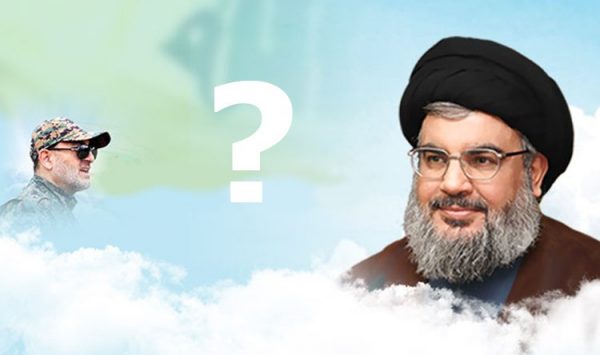 On the  first anniversary of the death of Hezbollah’s military commander   Mustafa Badreddine , the speech of Hezbollah Secretary-General Hassan Nasrallah did not provide any answers about his assassination , but added more doubts ,  suspicions and questions. Nasrallah accused Saudi Arabia and Israel of being behind the story of internal differences that led to the  assassinations of the senior Hezbollah commander according to experts

It is clear that Hezbollah is very embarrassed by the large number of questions about the killing of Badreddine, which was evident in  Nasrallah’s speech , which lasted about an hour. Nasrallah devoted   about ten minutes only to talk about Badreddine.

According to psychology analysts and  body language experts , “Nasrallah appeared embarrassed ,  nervous and preoccupied, because during the portion of the speech  about Badreddine  he did not lift his eyes from  the  text of the speech which  he  read carefully and did not move his hands or Eyes, which gives the impression of not telling the truth. ”

The experts pointed out that Nasrallah did not feel comfortable during the paragraphs about Badr al-Din, while  he spoke fluently and quickly and used his hands  for  gestures and deviated from  the written text.”

“Nasrallah was not the same as he  used to be in previous speeches, but he was nervous and sometimes sweating . When he tried to declare Badreddine  a martyr, he made mistakes and stammered,” one expert said   . “His body language indicates that   he is preoccupied and cautious, just as if he was  in a nightmare. “the expert said  .

Lebanese Shiite sources told Elaph that the issue of the liquidation of Badreddine did not close with the speech, but on the contrary, “the repercussions continue and will escalate  more,”

Israel’s military chief, Lt. Gen. Gadi Eisenkot, told an academic conference last March that the death of Mustafa Badreddine in May last year illustrated “the depth of the internal crisis within Hezbollah.”

He also said it reflected “the extent of the cruelty, complexity and tension between Hezbollah and its patron Iran.”

An Israeli military official said Israel believes the order to kill Badreddine was given by Nasrallah himself.

Israeli intelligence believes Badreddine had been feuding with Iranian military commanders in Syria over the heavy losses his group had suffered on the battlefield. Both Iran and Hezbollah are backing Syrian government forces.

At the time of his death last year, Hezbollah said Badreddine had been killed by insurgent shelling in Syria.

He was considered Hezbollah’s top military official and was among five members on trial in absentia at a court in the Netherlands over the bombing that killed former Lebanese Prime Minister Rafik Hariri and 21 others in Beirut in 2005.

Badreddine was a student of Imad Mughniyeh, Hezbollah’s previous military chief, who was considered one of the world’s most-wanted terrorists by Israel and the United States. Mughniyeh, who was Badreddine’s brother-in-law, was killed in a 2008 car bombing in Damascus that Hezbollah blamed on Israel. Mughniyeh’s Iranian wife blamed the Syrian regime for his murder.