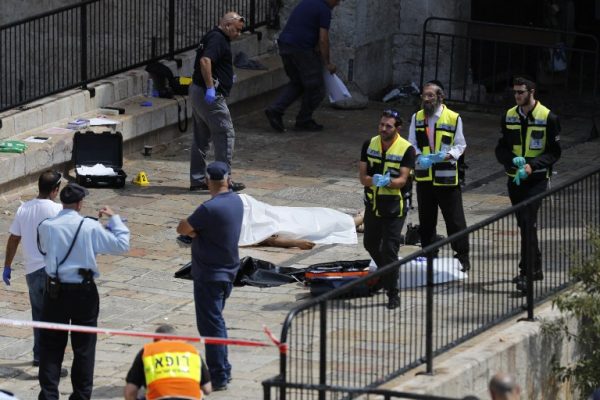 Israeli forensic policemen gather around the body of a Jordanian assailant who was shot dead in occupied old Jerusalem
Share:

Kassaji, 57, reportedly attacked an occupation officer with a knife in an alley in the occupied city. Reports said the Israeli officer was able to activate his gun and kill the man.

Denouncing the killing of the Jordanian citizen, the government demanded the full details of the incident.

Kassaji recently left the country through crossing the border near the Sheikh Hussein Bridge after obtaining an Israeli tourism visa and did not return with the tourist group he was with, Petra reported.

Minister of State for Media Affairs and Government Spokesperson Mohammad Momani was quoted as saying the Foreign Ministry is following up on the issue through the Jordanian embassy in Tel Aviv.

According to Kassaji’s nephew Suhail, Mohammad is survived by two sons, 19 and 14, and two daughters 27 and 24.

He described the uncle, who had visited Palestine twice or three times before, as having had “a very fun and loving personality and was loved by everyone”.

His family asked the government to bring the  body back home so they can bury him in Jordan but did not hear back from officials yet, the nephew said.

Another family member confirmed his age, adding he was a retiree who used to work as a financial manager at a private company.

Annabeh charity society said they will hold a funeral ceremony once the body arrives. The society is named after the original village of Kassaji near Ramlah in Palestine, which was occupied and completely demolished by Israeli forces in 1948.

Israeli forces also alleged that he had tried to stab a woman officer who then shot him.

In response, the foreign ministry denounced then “the barbaric act of the army of the Israeli occupation, whose premeditated shooting of the Jordanian Saeed Amro… killed him on the spot”.

The Israeli  Prime Minister’s Office responded to Jordan’s condemnation of Saturday’s killing of the  Jordanian citizen who was shot dead by a policeman  in Jerusalem’s Old City.

“It is outrageous to hear the support that the Jordanian government spokesman gave to the terror attack,” the statement said, adding that “it’s about time that Jordan will stop this game of duplicity. Just as Israel denounces terror attacks in Jordan, so must Jordan denounce terror attacks in Israel. Terrorism is terrorism, no matter where it is.”