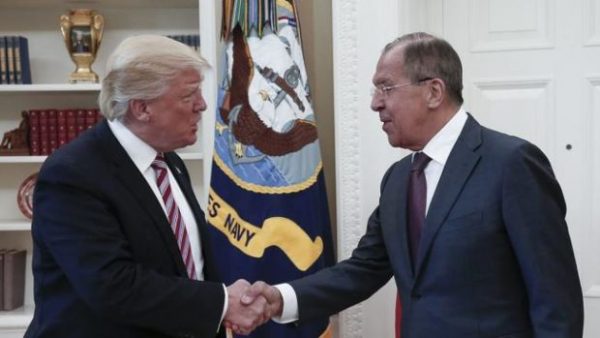 London – Russian Foreign Minister Sergei Lavrov’s meetings in Washington revealed an ongoing dispute between the two countries regarding the fate of head of Syria’s regime Bashar al-Assad. The administration of President Donald Trump insists on “cutting off the head” of Syria’s regime and 20 others of its aids, while Moscow warned from “the repetition of the Iraqi and Libyan models” in Syria, western diplomatic sources told Asharq Al-Awsat on Friday.

The sources said Trump’s administration now “has a clear position from Assad after intelligence apparatus in Washington, London and Paris received proofs that the Syrian regime was 100 percent responsible about the chemical attack in Khan Sheikhoun,” when its air forces attacked civilians in the countryside of Idlib.

Trump’s administration informed Lavrov during this week’s talks in Washington about three Noes: “No peace with Assad, no stability with Assad and no reconstruction with Assad,” the sources said.

They added, however, that Washington was lenient regarding “the method and the timing of Assad’s exit” from Syria and said Trump’s administration accepts those matters to be managed by Moscow, including a possibility that Russia hosts Assad in return of a US pledge that he would not be prosecuted by the International Criminal Court.

In return, Lavrov reiterated his country’s position, saying “the exit of Assad would lead to the collapse of the regime and would echo the Iraqi and Libyan disorder in Syria.”

The US side told lavrov that “around 20 officials from the Syrian regime are required to leave,” but accepted the presence of the Army and the security apparatus, the sources said, adding that Washington does not mind that a Alawite personality be tasked to rule the new regime.

“Washington only demands that the regime’s head be cut off and be sent out of Syria not to repeat the Yemeni model, when Ali Abdullah Saleh stayed in the country and played a negative role there,” the sources said.

Washington also informed Lavrov during their second round of talks that the US refuses to play a role in the Geneva and Astana talks in return of its insistence to see a “US-Russian deal on Syria that could be the start of bilateral relations between the two sides,” and that could develop to include an additional agreement on Ukraine.

The sources said that Washington also expressed its worries vis-à-vis the Iranian role in Syria.

They added that “Deraa might be the most suitable area from where both countries could start implementing a memorandum on establishing de-escalation zones in Syria” because this area was not under Iran’s control.

A western official said on Friday that the campaign launched by the Syrian regime, Iran and Hezbollah by sending reconnaissance aircrafts to the Jordanian borders came after the regime and its allies were worried from the execution of the de-escalation memorandum in southern Syria, under a US-Russian support.