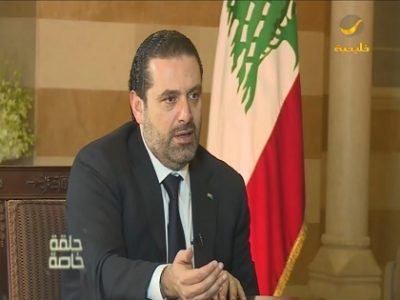 The statements “do not benefit Lebanon in any way whatsoever.” Hariri stressed.

Hariri also stated that no government in Lebanon can be formed without Hezbollah’s participation.

“Nasrallah represents large segments of our Shiite brothers and so does the AMAL Movement, and those blaming us for taking part in the same government with them must shut up,” Hariri said in an interview on Rotana Khalijia TV network, pointing out that any prime minister will be obliged to form a government with Hezbollah despite his disagreement with its regional policies.

He added that despite his rejection of all of Nasrallah’s “regional policies,” he has a responsibility to push the country forward.

The Iranian backed Hezbollah has launched several verbal attacks against Saudi Arabia and other Arabian Gulf countries in recent years.

Hezbollah is also the only armed militia in Lebanon and has used its arms on several occasions to bring down Lebanese governments.