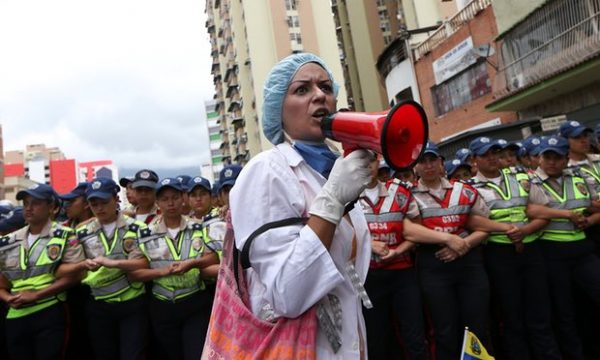 A woman shouts slogans in front of police during a rally of health workers and opposition supporters, amid a shortage of medical supplies. Photograph: Carlos Garcia Rawlins/Reuters
Share:
Infant and maternal deaths and cases of malaria are skyrocketing in Venezuela, which is grappling with severe medical shortages.

Confirmed malaria cases in 2016 stood at 240,000, a 76% increase over 2015. Maternal deaths rose 66% to 756. Last year, 11,466 infants died, a 30% increase, according to new records recently released by Venezuela’s health ministry. It’s the first health data released by the government in nearly two years.
The staggering increases illustrate how badly Venezuela lacks basic medicine, equipment and supplies to treat even the simplest of injuries.

Venezuelans say they must treat themselves at public hospitals.

“If you need to have an operation, nowadays, you must bring your own medicines to the hospital,” says Eugenia Morin, a 59-year old the housewife who protested against the government last week. “There are no supplies to attend the most basic emergencies.”

According to statistics released by the Venezuelan Pharmaceutical Federation, by June 2016, the country was already facing a shortage of more than 80% of the medicines doctors need.
And it’s not just medicine. Patients are responsible for any material needed to treat them: needles, gauze pads, saline solution. When patients can get the money together to purchase these items, they become targets — hospital rooms are not safe from thieves looking to sell medication on the black market, or fellow patients in desperation.

And more than 13,000 doctors — about 20% of the country’s medical workforce, have left the country in recent years due to the collapse of the health sector.

The health figures only represent one of many crises in Venezuela, which was once the richest nation in Latin America and is still home to the world’s largest oil reserves.

The country’s citizens also suffer from severe food shortages. According to a national polling firm, the average Venezuelan living in extreme poverty last year lost nearly 19 pounds due to lack of food and skipped meals.
Supermarket shelves are often empty. Skyrocketing inflation — set to go up 720% this year, according to the International Monetary Fund — makes whatever food that is available too expensive for many to buy.
Join the conversation
See the latest news and share your comments with CNN Health on Facebook and Twitter.

As Venezuelans suffer through the shortages, the country, led by President Nicolas Maduro, is diving further into political chaos.

Since the Supreme Court — stacked with Maduro loyalists — attempted to take away legislative power from the country’s opposition-led National Assembly in late March, protests have raged across the country.

Protesters have been met by oppressive police tactics, including one incident of a tank rolling over a protester. Thirty-six Venezuelans have died in the protests since the unrest began.