Russian intelligence officer beheaded in Syria by IS: Report 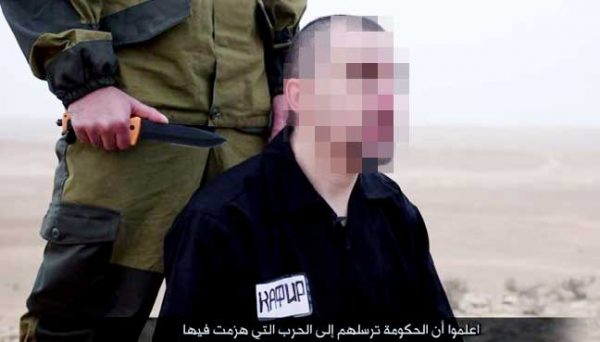 Islamic State claims that it beheaded a Russian intelligence officer in Syria
Share:

Islamic State has issued a video showing the beheading of a man it described as a Russian intelligence officer captured in Syria, the U.S.-based SITE monitoring website reported on Tuesday.

But the Russian defense ministry denied any Russian serviceman had been captured and killed by Islamic State in Syria.

The 12-minute Russian-language video, released on the day Russia celebrated the anniversary of the 1945 victory over Nazi Germany with military parades, showed the man dressed in a black jump suit kneeling in a desert scene and urging other Russian agents to surrender.

“This idiot believed the promises of his state not to abandon him if he was captured,” a narrator says in the recording, before the prisoner was beheaded by a bearded man dressed in combat fatigues.

The authenticity of the recording and the identity of the man could not immediately be verified, nor was it clear when the killing occurred.

In comments cited by Russian news agencies, the defense ministry said all Russian forces in Syria were accounted for and continuing the ‘struggle against international terrorism’.

There was no immediate response from the FSB security service.

Russian senator Vikor Ozerov told Interfax news agency “there would be hell to pay” if the recording proved authentic.

Russian forces are backing Syrian President Bashar al-Assad in his war with rebels and Islamist militants seeking to oust him. The video showed scenes of what it described as the aftermath of Russian bombing raids in Syria.

The Russian defense ministry says about 30 Russian servicemen have been killed since the start of the Kremlin’s operation there in September 2015.