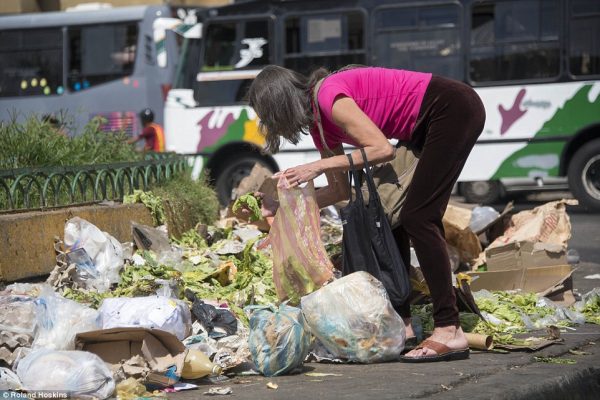 Food shortages across Venezuela mean that ordinary middle-class families have been reduced to looking for scraps of food in the gutter and by the side of the road, such as this woman pictured in Caracas as police look on. Vanessa told MailOnline: ‘Chavez’s legacy is people like me looking for food in the garbage.’
Share:

Once Latin America’s richest country, Venezuela can no longer feed its people, hobbled by the nationalization of farms as well as price and currency controls

YARE, Venezuela— Jean Pierre Planchart, a year old, has the drawn face of an old man and a cry that is little more than a whimper. His ribs show through his skin. He weighs just 11 pounds.

His mother, Maria Planchart, tried to feed him what she could find combing through the trash—scraps of chicken or potato. She finally took him to a hospital in Caracas, where she prays a rice-milk concoction keeps her son alive.

“I watched him sleep and sleep, getting weaker, all the time losing weight,” said Ms. Planchart, 34 years old. “I never thought I’d see Venezuela like this.”

Her country was once Latin America’s richest, producing food for export. Venezuela now can’t grow enough to feed its own people in an economy hobbled by the nationalization of private farms, and price and currency controls.

Maria Planchart has had to go through trash to find food for her one-year-old son, Jean Pierre. She is among a growing number of Venezuelans suffering from hunger and malnutrition. Photo: Miguel Gutiérrez for The Wall Street Journal

Venezuela has the world’s highest inflation—estimated by the International Monetary Fund to reach 720% this year—making it nearly impossible for families to make ends meet. Since 2013, the economy has shrunk 27%, according to local investment bank Torino Capital; imports of food have plunged 70%.

Hordes of people, many with children in tow, rummage through garbage, an uncommon sight a year ago. People in the countryside pick farms clean at night, stealing everything from fruits hanging on trees to pumpkins on the ground, adding to the misery of farmers hurt by shortages of seed and fertilizer. Looters target food stores. Families padlock their refrigerators.

Three in four Venezuelans said they had lost weight last year, an average of 19 pounds, according to the National Poll of Living Conditions, an annual study by social scientists. People here, in a mix of rage and humor, call it the Maduro diet after President Nicolás Maduro.

For more than a month, Venezuelans have protested against the increasingly authoritarian government of Mr. Maduro; by Friday, more than 35 people had been reported killed in the unrest. The country’s Food Ministry, the president’s office, the Communications Ministry and the Foreign Ministry didn’t return calls or emails requesting comment for this article.

“Here, for the government, there are no malnourished children,” said Livia Machado, a physician and child malnutrition expert. “The reality is this is an epidemic, and everyone should be paying attention to this.”

Dr. Machado and her team of doctors are seeing a dramatic increase in emaciated infants brought to the Domingo Luciani Hospital in Caracas, where they work.

The problem is no better in towns like Yare, south of Caracas, where the government’s leftist movement was long popular. “To eat,” said Sergio Jesus Sorjas, 11 years old, “I sometimes go to the butcher and I say, ‘Sir, do you have any bones you can give me?’ ”

The boy receives nutritional formula or a traditional Venezuelan corncake from the parish priest. Sergio said he hasn’t tasted meat in months: “Sometimes, I don’t eat at all.”

The Catholic charity Caritas and a team led by Susana Raffalli —a specialist in food emergencies who has worked in Guatemala, Africa and other regions tormented by hunger—are monitoring conditions here.

The most recent Caritas study of 800 children under the age of 5 in Yare and three other communities showed that in February nearly 11% suffered from severe acute malnutrition, which is potentially fatal, compared with 8.7% in October. Caritas said nearly a fifth of children under age 5 in those four communities suffered from chronic malnutrition, which stunts growth and could mark a generation.

“What’s serious is not that we’re at the crisis threshold, but rather the velocity at how we got there,” Ms. Raffalli said.

By World Health Organization standards, Caritas’s findings constitute a crisis that calls for the government to marshal extraordinary aid. But authorities have resisted offers of food and aid from abroad.

The country’s growing malnutrition is made worse by a breakdown in health care, the spread of mosquito-borne illness and what the Pharmaceutical Federation of Venezuela has called a severe shortage of medicines.

In past years, the farms south of here produced at capacity, everything from chickens to soybeans.

Alberto Troiani, 48 years old, still works the hog farm that his father, an Italian immigrant, founded in the 1970s. His business has now been battered by price controls, a shortage of supplies and criminal gangs.

The farm has gone from 200 female pigs, each producing a dozen piglets, to 50. Mr. Troiani can’t afford the high-protein feed and medicines he once used. Full-grown pigs now weigh 175 pounds instead of 240 pounds.

What is worse, he said, walking past half-empty pens, is seeing his pigs sometimes bite off the tails and ears of others.

Mr. Troiani talked about leaving Venezuela with his mother, Yolanda Facciolini, 69 years old, who arrived from Italy in the 1960s. He said he would have no buyers: All around him, people are abandoning their farms. Thieves take what is left behind, he said—copper wire, tractors, weed killer.

The agricultural companies the government has taken over, including milk factories and distributors of fertilizer and feed, are closed or barely operating, according to economists and farm groups.

“The system is created so you can’t win,” said Alberto Cudemus, who heads the national association of pig farmers. “The government thinks its survival is in communism, not in us, not with production. And that’s where they’re wrong.”

Diogenes Alzolay, 65 years old, once had two small construction companies and later drove a cab. He is now trying to sell the freezers of the small store he once ran along with his books, lamps, photocopier and taxi.

He and his wife, Nidea Cadiz, need money to feed their children, who include a 2-year-old boy and a 7-year-old girl. He also has three teenagers, ages 13, 16 and 19.

On a recent day, Mr. Alzolay was frying sardines. To stretch the food they have, a couple of family members skip eating one day to leave enough for the others. Meals are sometimes the local corncakes known as arepas, vegetables, mangoes and the occasional canned fish.

“I’ve thought about running away, but I can’t do it because of our very little kids,” Mr. Alzolay said. “Getting to this extreme makes me want to cry.”

Nine in 10 homes said they don’t make enough money to buy all their food, according to the poll of living conditions. Nearly a third of Venezuelans, 9.6 million people, eat two or fewer meals a day, up from 12.1% in 2015, the poll found; four of out five in the nation are now poor.

Cesar Augusto Palma, 75 years old, lays out the grim arithmetic of high inflation on a fixed income. His pension is now worth about $10 a month, he said, enough to buy four boxes of milk.

“They need it more than me,” said Germain, who weighs 50 pounds instead of 70 pounds, about the average for a boy his age. Nearby, his brothers, Cesar Augusto, 10 years old, and Angel Jose, age 4, try to fly a handmade kite.

“I am hungry,” Germain said. “I feel like a pain in my belly.” Asked his favorite meal, he said, “Arroz con pollo,” rice and chicken, which he last ate in 2015.

At the Domingo Luciani Hospital in Caracas, Ms. Planchart cried when she recalled the ways she tried to feed baby Jean Pierre and her four other children. She went through trash bags, searching for bits of corn or bread free of maggots.

Ms. Planchart had a string of jobs: cashier, hair salon worker, cook. Then the work disappeared; inflation and food shortages made everything worse. At one point, she said, a neighbor cooked a dog.

As she watched Jean Pierre grow thinner and then stop moving, she decided to seek help from Dr. Machado and other malnutrition experts at the hospital. The doctors don’t have vitamins, antibiotics or serum for sick babies.

“We’re not feeding him well in this hospital,” Dr. Machado said. “No boy like this is going to get better with bananas and cheese.”

Ms. Planchart, meantime, rocked Jean Pierre in her arms, a balm for both.

“He hasn’t fully recovered,” she said of her baby, who now has chickenpox. “The idea is for him to get his weight up and that we get his metabolism to where it should be. But he’s delicate.”

Once Latin America’s richest country, Venezuela now has the world’s highest inflation rate, making it nearly impossible for families to make ends meet. The economy has contracted by more than a quarter since 2013. 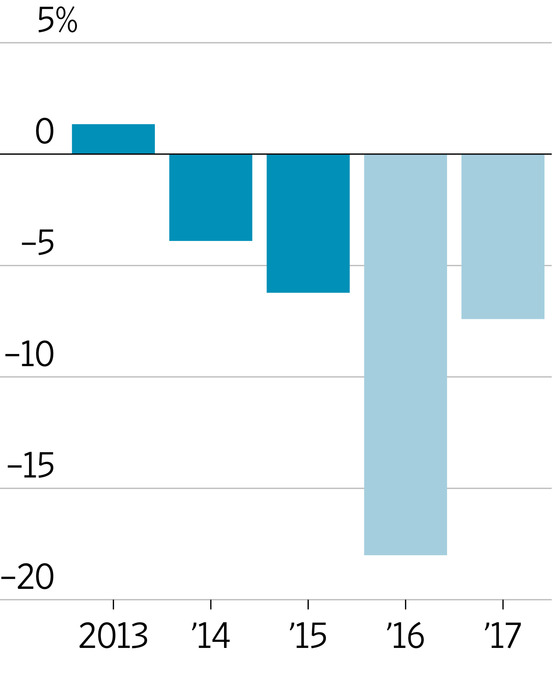 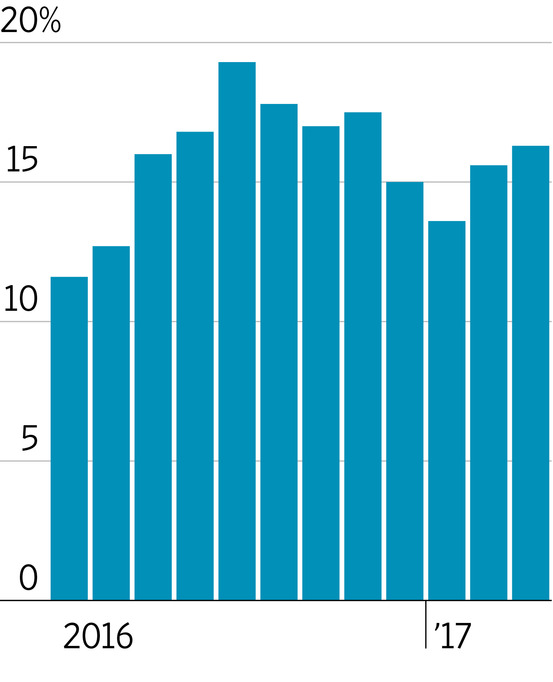 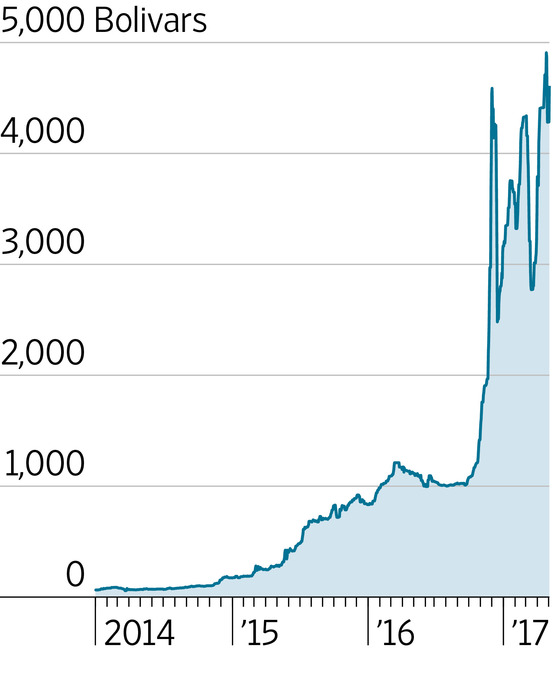 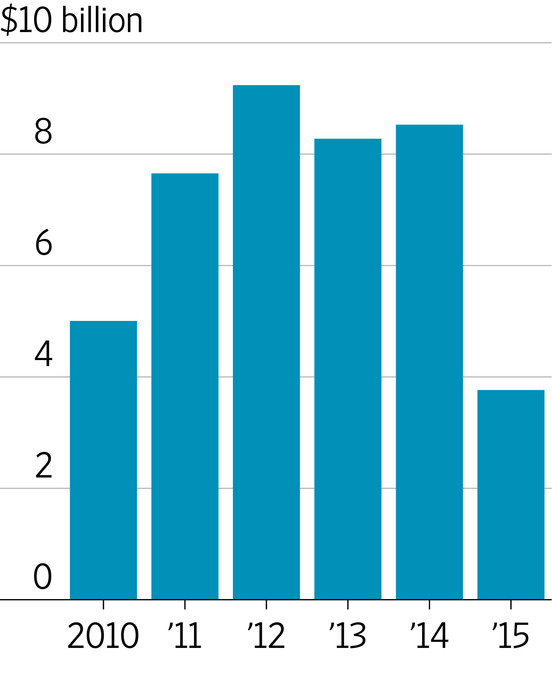