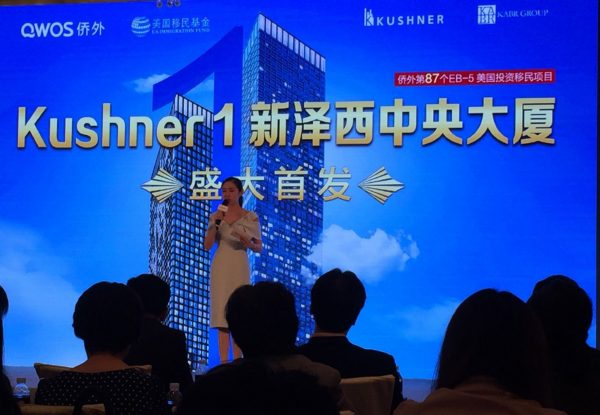 BEIJING — The Kushner family came to the United States as refugees, worked hard and made it big — and if you invest in Kushner properties, so can you.

That was the message delivered Saturday by White House senior adviser Jared Kushner’s sister to a ballroom full of wealthy Chinese investors, renewing questions about the Kushner family’s business ties to China.

Over several hours of slide shows and presentations, representatives from the Kushner family business urged Chinese citizens gathered at the Ritz-Carlton hotel to consider investing hundreds of thousands of dollars in a New Jersey real estate project to secure what’s known as an investor visa.

The EB-5 immigrant investor visa program, which allows foreign investors to invest in U.S. projects that create jobs and then apply to immigrate, has been used by both the Trump and Kushner family businesses.

But President Trump’s vow to crack down on immigration, as well as criticism from members of Congress, has led to questions about the future of a program known here as the “ golden visa.”

The EB-5 has been extremely popular among rich Chinese who are eager to get their families — and their wealth — out of the country, though the fact that some move their money out illegally has made the program unpopular with the Chinese government, too.

In the ballroom of the Ritz-Carlton on Saturday, Chinese investors were advised to invest sooner rather than later in case the rules change. “Invest early and you will invest under the old rules,” one speaker said.

The woman identified as “Jared’s sister” was believed to be Nicole Kushner, who is involved in the family business, not Dara Kushner, who generally stays out of the spotlight. But the woman’s face was not clearly visible from the back of the ballroom, where reporters were told to remain.

Saturday’s event in Beijing was hosted by the Chinese company Qiaowai, which connects U.S. companies with Chinese investors. The tagline on a brochure for the event: “Invest $500,000 and immigrate to the United States.”

Qiaowai is working with Kushner to secure funding for Kushner 1, a real estate project in New Jersey. Promotional materials tout the buildings’ proximity to Manhattan and note that the project will create more than 6,000 jobs.

“This project has stable funding, creates sufficient jobs and guarantees the safety of investors’ money,” one description reads.

Who is Jared Kushner?

Jared Kushner is President Donald Trump’s son-in-law but he’s also one of his key confidants. Here’s a closer look at the president’s senior advisor. (Video: Deirdra O’Regan/Photo: Jabin Botsford/The Washington Post)
“Even though this is the project of the son-in-law’s family, of course it is still affiliated,” Wang.

Wang reasoned that the link to Trump would be a boon if the presidency goes well but could be disastrous if it does not: “We heard that there are rumors that he is the most likely to be impeached president in American history. That’s why I doubt this project.”

Many of the people who attended the event declined to be interviewed, citing privacy concerns, or they were blocked by organizers from speaking to the news media.

Indeed, though the event was publicly advertised in Beijing, the hosts were exceptionally anxious about the presence of reporters.

Journalists were initially seated at the back of the ballroom, but as the presentations got underway, a public relations representative asked The Post to leave, saying the presence of foreign reporters threatened the “stability” of the event.

At one point, organizers grabbed a reporter’s phone and backpack to try to force that person to leave. Later, as investors started leaving the ballroom, organizers physically surrounded attendees to stop them from giving interviews.

Asked why reporters were asked to leave, a public relations representative, who declined to identify herself, said simply, “This is not the story we want.”