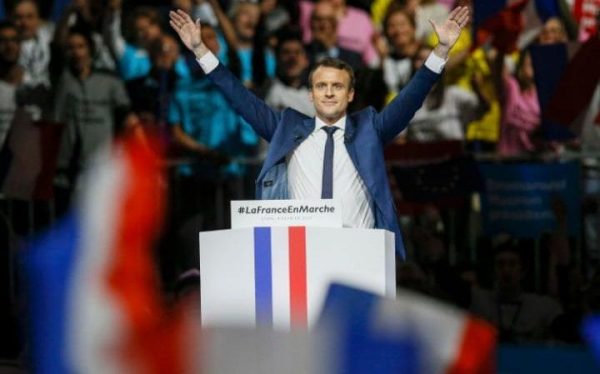 Whether or not Emmanuel Macron wins the French presidency in next Sunday’s runoff, he has already accomplished the unthinkable.

That’s thanks to an unorthodox, American-style grassroots campaign, which has harvested ideas from the left and the right, tossed them with a dose of startup culture and business school acumen and produced a political phenomenon. Without a party to back him up or any experience stumping for votes, the 39-year-old Macron came out on top of the first round of the French presidential vote, winning over 8 million voters and overturning decades of French political expectations.

An inside look by The Associated Press at Macron’s campaign found a mix of high-tech savvy, political naivete and a jarring disconnect between his multilingual, well-traveled campaign team and a mass of ordinary voters who have never left France and fear being crushed by immigration and job losses.

“It’s not a done deal,” campaign spokeswoman Laurence Haim told The AP during a campaign trip Saturday, careful to insist that, despite polls naming Macron the election favorite, risks remain. “We are extremely cautious.”

The centrist Macron is facing off against far-right National Front leader Marine Le Pen in the presidential runoff.

Detractors dub Macron a bubble that, if elected, would deflate and self-destruct at the first national crisis. Le Pen labels him a puppet of the borderless financial and political elite at a time when many workers feel like globalization roadkill.

Le Pen’s campaign is unusual in its own ways. She has broadened her support base far beyond the xenophobic old guard associated with her National Front party when her father Jean-Marie was in charge. Today the people stumping for Le Pen votes at farmers’ markets and university campuses include the children of immigrants, academics, gays and former communists. She is also campaigning in her own name – not that of her party, a clear bid to distance herself from its past stigma.

Macron’s team wants to puncture the heterogeneous image of Le Pen’s campaign, and paints her as a closed-minded nationalist with a dangerous populist vision.

“It’s a fight between two different kinds of societies, for France and for Europe,” Haim said. “We are going to show the French people – and hopefully the world – that we are fighting for something bigger than us.”

Haim worked 25 years as a journalist in Washington before deciding to join politics in December – out of fear of seeing a French Donald Trump rise to power on a populist wave.

Since Macron won the first-round vote, Haim and other members of his team have been shuttling non-stop around France, from a factory in Macron’s northern hometown of Amiens to the site of a Nazi massacre to a farm in Usseau in central France. His campaign headquarters in southern Paris includes a nap room, though it’s used more for storing spare shoes than rest.

Macron’s team starts their day about 7 a.m. and goes until 1 a.m., huddling around laptops in a low-profile office building. A crucial part of the operation is the “riposte desk,” assigned with tracking Macron’s public statements and the social media reaction. For each hostile tweet, Macron’s team tries to counter.

National Front activists and their supporters have a head start here – they’ve been using social networks for years to build their following outside France’s traditional media.

Macron’s team is increasingly cautious about language, avoiding English words in public statements or anything that smacks of elitism. That’s especially important because his campaign team is exceptionally international – more than half have lived abroad, unlike most French voters.

Le Pen is much better at speaking the language of the people, yet her headquarters is on one of Paris’ most elite streets – the same one as the presidential Elysee Palace. In contrast to Macron’s campaign, she never envisions losing, saying “When I am president,” not “if.”

For both campaigns, security is increasingly important, especially since an Islamic State-claimed attack in Paris earlier this month. With sniffer dogs, pat downs and layers of bodyguards, it’s tougher to enter a campaign event for either candidate now than it was to follow Nicolas Sarkozy’s presidential campaign in 2012 – and he was president at the time.

With concerns about Russian meddling a running theme in the French race, three key figures in Macron’s security team are Russian-speakers – his cybersecurity chief, his towering bodyguard and his security strategist.

The campaign team also includes a large number of political novices, coming from technical, financial or cultural backgrounds, and their campaign inexperience sometimes shows. Macron is trying to learn from recent electoral blows, such as when Le Pen upstaged him last week at a Whirlpool factory in Amiens that is threatened with closure.

Macron “is trying to understand what is happening to French society,” Haim said.

On Saturday, Macron snaked slowly through the open-air market of Poitiers, absorbing a string of complaints from farmers about European aid and competition. Macron remained somewhat stiff but patient, listening to lengthy laments then laying out his plans. He made no generous promises but defended his vision of a simplified yet stringent state and a unified Europe.

When a baker refused to shake Macron’s hand, he took it in stride, moving on to a flower seller happy to seek his autograph.

His staffers buzzed around taking names of his interlocutors, and minutes later in Macron’s convoy afterward, they shared lessons learned on the rough road of political life. They’ve come a long way since a year ago, when Macron launched a vague political movement.

“Everybody was telling him it’s going to be impossible, you’re crazy. It could not happen in France,” Haim said. “He looked at them and said, ‘Trust me, I’m going to do it.'”

And a year later, thanks also to a series of electoral surprises that hurt his rivals, Macron won the first-round vote and is now a step away from the French presidency.