U.S.-backed militias claim big advance against IS in Syria’s Tabqa 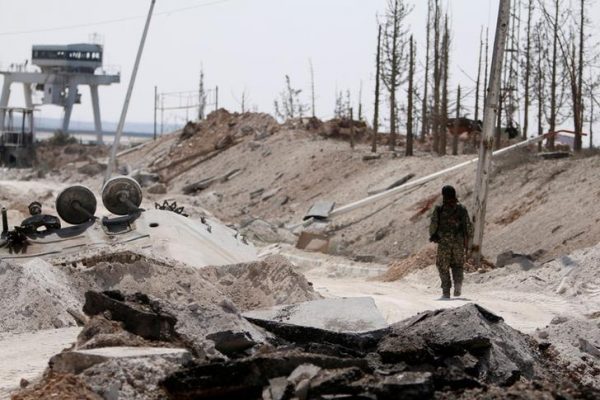 U.S.-backed militias said on Sunday they had made a big advance in Tabqa, a strategically vital town controlling Syria’s largest dam, in their campaign to drive Islamic State from its stronghold of Raqqa, 40km (25 miles) downstream.

The Syrian Democratic Forces (SDF), a group of Kurdish and Arab militias, will wait to assault Raqqa until it seizes Tabqa, its military officials have previously said, but it had made only slow progress since besieging the town early this month.

In a statement it circulated on social messaging sites, the SDF said it had captured six more districts of Tabqa and distributed a map showing that Islamic State now controlled only the northern part of the town, next to the dam.

The Syrian Observatory for Human Rights, a Britain-based war monitor, said the SDF had gained almost complete control over Tabqa in its advance.

Tabqa was isolated from Raqqa in late March after the United States helped the SDF carry out an airborne landing on the southern bank of the Euphrates, allowing it to capture the areas around the town, including an important airbase, and cut the road.

Islamic State still holds several Tabqa districts along the southern bank of Lake Assad and the southern section of the Euphrates dam, including its operations facilities and a hydro-electric power plant.

Raqqa now lies in an Islamic State enclave on the northern bank of the Euphrates that measures about 50km at its widest point on an east-west axis and 20km on its longest north-south axis, but with SDF salients stretching almost to the city.

Islamic State’s only means of crossing to its main territory on the south bank of the Euphrates is by boat after aerial bombing put the region’s bridges out of service.

The jihadist group still controls large swathes of Syria’s Euphrates basin and its vast eastern deserts near the border with Iraq, but it has lost large tracts of its territory over the past year and many of its leaders have been killed.