Russians call on Putin to quit in peaceful protest 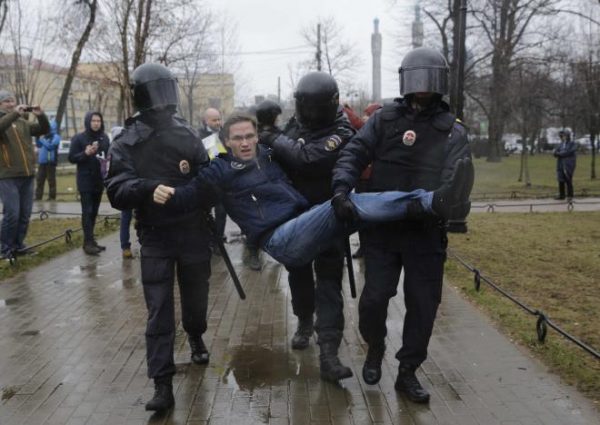 Interior Ministry officers detain a participant of an opposition protest, calling for Russian President Vladimir Putin not to run for another presidential term next year, in St. Petersburg, Russia, April 29, 2017. REUTERS/Anton Vaganov
Share:

Several hundred Russians lined up in central Moscow on Saturday under the gaze of riot police to hand over handwritten appeals for President Vladimir Putin to quit, as similar protests took place in other cities.

Putin, who has dominated Russian politics for 17 years, has not said whether he will run in presidential elections in March 2018. But the 64-year-old politician, who enjoys high popularity ratings, is widely expected to do so.

Saturday’s protest in the capital — called “We’re sick of him” — was organized by the Open Russia movement founded by Kremlin critic Mikhail Khodorkovsky. Once Russia’s richest man, he was freed by Putin in 2013 after spending a decade in jail for fraud, a charge Khodorkovsky said was politically-motivated.

One of hundreds shepherded into a queue behind metal barriers by police before handing over their petitions one-by- one, Anna, a 16-year-old Moscow schoolgirl, said she hoped Putin would get the message and not run again.

“Nothing positive has happened in our country on his watch and I have the sense that things are getting worse, and that the main problem is the fact that those in power are the same,” she told Reuters.

Her preference for president was opposition politician Alexei Navalny, who spent 15 days in jail last month after helping organize the biggest anti-government protests since 2012, which ended with over 1,000 arrests.

Videos posted by Russian media showed police in riot gear detaining protesters in St Petersburg, where activists reported over 100 arrests. There was no official confirmation of the arrests.

Police said 250 people had showed up in Moscow, the Interfax news agency reported, while Maria Baronova, an Open Russia activist, said at least 500 people had handed over a petition.

Irina Glushkova, 64, standing in the same line as the schoolgirl, said she and many others simply didn’t agree with how Putin governed.

“I’m sick of the situation,” she said. “I’m the same age as Putin and I don’t think I’m less intelligent than him, but my opinion is not taken into account at all.”

Authorities have stepped up pressure on Open Russia in recent days. The General Prosecutor’s Office ruled on Wednesday that the activity of Open Russia’s British arm was “undesirable” and accused it and other organizations of trying to discredit the election.

On Thursday, police searched the Moscow offices of Open Russia’s Russian branch. Activists said they confiscated 100,000 blank appeal forms which the foundation had hoped to hand out to people encouraging them to call for Putin to quit.

On Friday, REN TV, a Russian TV channel, broadcast a documentary about Open Russia activists, some of whom it accused of having criminal records, of being drug addicts, and of cultivating close links with the U.S. government.

Activists dismissed the program as a cheap stunt designed to discredit them, with at least one noting that REN TV had somehow obtained video footage stored in his mobile phone.