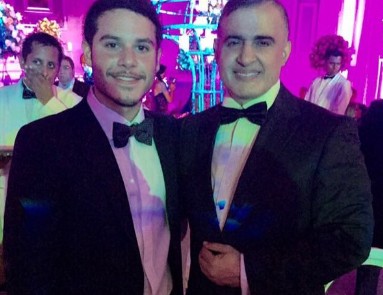 Yibram Saab and his father Tarek William Saab in a file photo
Share:

The son of Venezuela’s pro-government human rights ombudsman has surprised the crisis-struck nation by publicly calling on his father to end “injustice” amid major protests against the leftist administration.

The opposition accuses ombudsman Tarek Saab of turning a blind eye to human rights abuses and a lurch into dictatorship by Venezuela’s unpopular President Nicolas Maduro.

In many of the big protests in Caracas in recent days, marchers aimed to converge on his office, but security forces firing tear gas and water cannons blocked the crowds. Some 29 people have died in this month’s unrest.

Venezuelans were shocked to see Saab’s son, a law student, publicly breaking ranks with his powerful father and saying he himself had been a victim of what he called government repression in marches.

“Dad: In this moment you have the power to end the injustice that has sunk this country,” said Yibram Saab in a video posted on YouTube late on Wednesday, in which he was seen sitting outside and reading from a piece of paper.

“I ask you as your son, and in the name of Venezuela that you represent, that you reflect and do what you must do. I understand, I know this isn’t easy, but it’s right the right thing to do,” added the young Saab.

There was no immediate response from the ombudsman, a former Socialist Party governor. His office did not respond to a request for comment.

In a letter posted later on Twitter, Maduro’s son called on Saab’s son to reconsider his position. The president’s son echoed the government stance that demonstrators are terrorists trying to instigate a coup amid the biggest protests since 2014.

“Your three minutes of fame could have been different. I think you could have picked up the phone and spoken with your father, expressing to him your love and concern and listening to him,” Nicolas Maduro Guerra said.

Opposition leaders said the video was evidence of growing fissures within “Chavismo,” a movement founded by charismatic late leader Hugo Chavez that has taken a hit under Maduro, a former bus driver and union leader whose presidency has been marked by a stark recession.

They hoped the video would spur protesters to keep up street action despite fatigue, injuries, arrests, and no sign of concessions from Maduro.


“We’ve said it before, Venezuela isn’t divided. The majority of us want a change, and that includes the families of those who today prop up this regime,” tweeted opposition lawmaker Juan Andres Mejia amid a flurry of social media chatter about Saab’s son.

Opposition lawmakers, who have a legislative majority but say they have been left toothless by the Supreme Court, were planning to hold their twice-weekly National Assembly session in Caracas’ lush Miranda Park on Thursday, and invited Venezuelans to attend the “street session.”

As well as demanding a general election, Maduro’s opponents are calling for the release of jailed activists, humanitarian aid to help offset shortages of food and medicine, and autonomy for the legislature.

They have been galvanized by international condemnation of Maduro’s government in the last month and Caracas’ increasing isolation on the global stage.

Venezuela said on Wednesday it was withdrawing from the Organization of American States and Maduro was set to present Venezuela’s letter of resignation from the body on Thursday, the start of a removal process that could take two years.

His move could have been a pre-emptive one. The head of the OAS had said Venezuela could be expelled from the group, accusing Maduro’s government of eroding the country’s democracy by delaying elections and refusing to respect the opposition-led Congress.