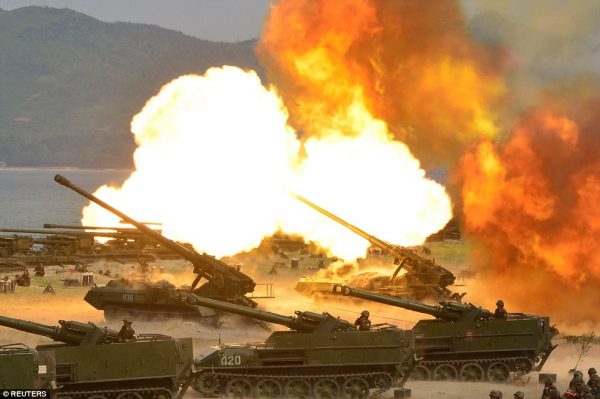 North Korea held massive live-fire artillery drills on Tuesday as it marked the anniversary of the founding of its military
Share:

The US military’s top commander in the Pacific has said an advanced missile defence system in South Korea aims to bring North Korean leader Kim Jong-un “to his senses, not to his knees”.

Adm Harry Harris, head of US Pacific Command, told Congress the US would be ready “with the best technology” to defeat any North Korean missile threat.

The US has also deployed warships and a submarine to the Korean peninsula.

China argues that the US Thaad missile system will destabilise security.

Tensions have been rising amid fears North Korea could be planning further missile or nuclear tests.

Speaking ahead of a classified briefing for senators at the White House, Adm Harris said he believed that North Korea would try to attack the US as soon as it has the military capabilities.

“With every test [Mr] Kim grows closer to his goal, which is using nuclear weapons on US cities,” he told the House armed services committee in Washington DC.

“As [US President Donald] Trump and [Defence Secretary James] Mattis have said, all options are on the table,” he added.

“It is purely a defensive system. It is aimed north, not west,” he said, adding: “It poses no threat to China.”

His comments come after China launched its second aircraft carrier in the latest sign of its growing military strength.

The as-yet unnamed ship was transferred into the water in the north-eastern port of Dalian, state media said. It will reportedly be operational by 2020.

The heated rhetoric between the US and North Korea has intensified in recent weeks.

China’s Foreign Minister, Wang Yi, has called for an end to US-South Korea war games and also a halt to North Korea’s nuclear development in order to reduce tensions in the region.

The Trump administration, which has been urging China to rein in its ally, North Korea, is due to hold a briefing for senators on the situation later on Wednesday.

The Thaad (Terminal High-Altitude Area Defense) system is designed to intercept and destroy short and medium-range ballistic missiles during their final phase of flight.

“South Korea and the United States have been working to secure an early operational capability of the Thaad system in response to North Korea’s advancing nuclear and missile threat,” South Korea’s defence ministry earlier said in a statement.