Pentagon chief wants a strong Saudi Arabia, says Iran is the troublemaker of the region 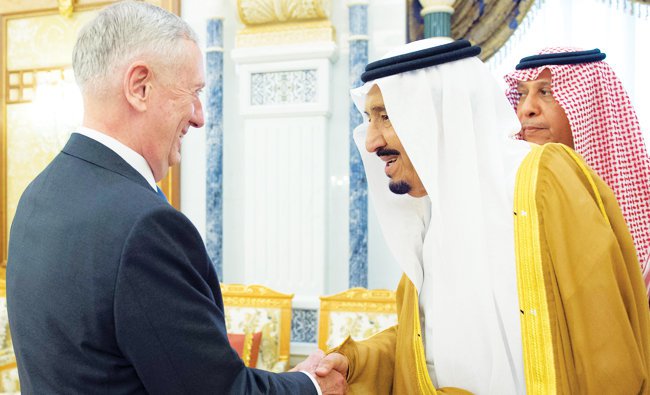 The US wants to see a strong Saudi Arabia, Defense Secretary Jim Mattis said during talks with King Salman on Wednesday, aimed at reinvigorating the Riyadh-Washington alliance.

Mattis said Iran was playing a destabilizing role in the region but its influence would be overcome to try to reach a solution to the conflict in Yemen through UN-brokered negotiations.

“Everywhere you look if there is trouble in the region, you find Iran,” Mattis told reporters in Riyadh after meeting senior Saudi officials. “We will have to overcome Iran’s efforts to destabilize yet another country and create another militia in their image of Lebanese Hezbollah, but the bottom line is we are on the right path for it,” Mattis added.

Mattis also hinted that President Donald Trump could visit the Kingdom, a longtime US ally which has welcomed Washington’s firmer line against the common adversary Iran. “It is in our interest to see a strong Saudi Arabia,” Mattis said at the start of talks with Deputy Crown Prince Mohammed bin Salman, pointing to the country’s “military security services and secret services.”

“What we can do here today could actually open the door possibly to bringing our president to Saudi Arabia,” Mattis said.

The two sides pledged to work closely to broaden security cooperation and to ramp up support for the Saudi-led coalition fighting Iranian-backed Houthi militias in Yemen.

Mattis’ talks with the king at Al-Yamamah Palace focused on “efforts to strengthen US-Saudi partnership,” said Johann Schmonsees, a spokesman of the US Embassy.

Mattis discussed with the king and the deputy crown prince efforts to strengthen commitments to the US-Saudi security partnership, Schmonsees said.

Saud Al-Awadh, a political analyst, said: “The trip of the US defense secretary marks the first visit of the Pentagon chief to the Kingdom. It has added significance keeping in view the American counterterrorism operations and airstrikes in Yemen, where US forces are also providing moderate intelligence support to the Saudi-led forces.”

Mattis will also visit Israel, Egypt, Qatar and Djibouti. The Pentagon has billed the trip, Mattis’ fourth as defense secretary and second to the Middle East region, as an opportunity for him to discuss the ongoing fight against terrorism throughout the region.

Mattis traveled to Egypt Thursday after wrapping up his two-day trip to the Kingdom. He will visit Israel Friday before returning to the Gulf Saturday for talks in Qatar. The trip is primarily aimed at boosting the alliance between the US and these five countries, which are important players in the region.