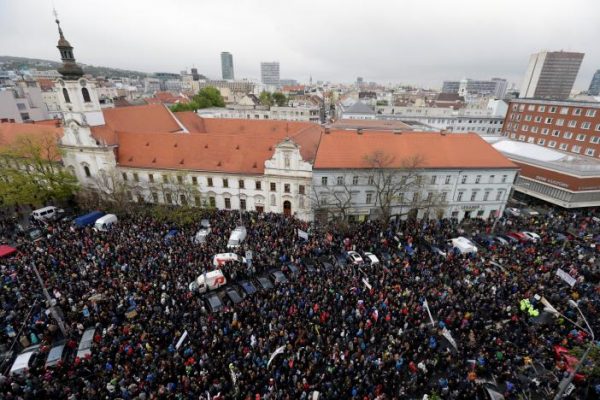 Thousands of Slovaks joined a rally on Tuesday to protest against corruption and demand the resignation of the interior minister, a close ally of Prime Minister Robert Fico, over his ties with a developer under investigation for tax fraud.

Slovakia’s economy has boomed and living standards have risen sharply since it joined the European Union in 2004, but many Slovaks say their country lags western Europe in the fight against corruption.

Other countries in the region including Romania and Hungary have also seen large anti-government protests in recent months.

Tuesday’s demonstration in Bratislava, one of the largest since Fico took power in 2012, largely targeted Interior Minister Robert Kalinak, who has resisted pressure to step down over his business relations with real estate developer Ladislav Basternak, who is being investigated over possible tax fraud.

Kalinak has said he bought a 17 percent stake in one of the companies belonging to the developer. Both he and Basternak have denied any wrongdoing.

Critics argue that Kalinak remaining as interior minister prevents an independent investigation into the tax issue. Fico himself also lives in a rented apartment owned by Basternak in central Bratislava.

“As a new father, I want my son to grow up in a country where he can live decently and without making compromises with moral values,” said Matej Matus, 35, one of around 5,000 protesters gathered in central Bratislava.

Slovak President Andrej Kiska, a rival of Fico, has thrown his support behind the protesters and urged Kalinak to quit.

“If we remain silent nothing will change, therefore I challenge people to speak if they see something happening that isn’t right,” Kiska said this week.

Fico did not reply to emailed questions on Tuesday. He backed Kalinak last year when the minister first faced protests demanding his resignation.

The protesters also called on Tuesday for the publication of the results of an investigation into links between leading center-right politicians and businessmen first revealed in 2011 that has not yet been closed.

They demanded a fresh probe into decades-old crimes pardoned under amnesties granted by former prime minister Vladimir Meciar to his secret service chief and 12 others for the 1995 kidnapping of the then-president’s son. Lawmakers canceled those pardons this month after 84,000 signed the largest online petition in Slovakia’s history demanding action.

The government has stepped up anti-corruption efforts recently, introducing a 35 percent tax on dividends from companies in tax havens and banning firms with unclear ownership from doing business with the state.