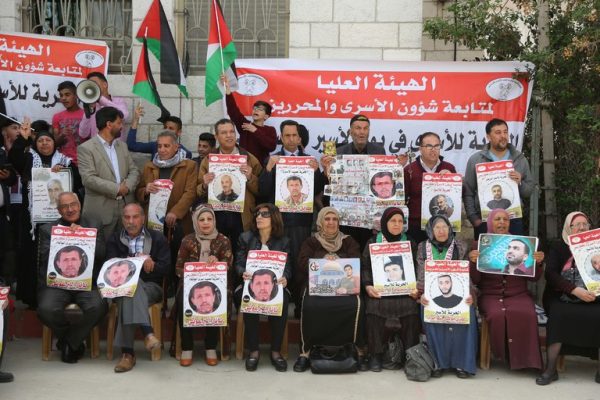 Photos of prisoners during a demonstration demanding the release of the Palestinians held in Israeli prisons, in Ramallah, West Bank, this month. Credit Issam Rimawi/Anadolu Agency, via Getty Images
Share:

Hundreds of Palestinians in Israeli jails began a hunger strike on Monday in response to a call by prominent prisoner Marwan Barghouti, widely seen as a possible future Palestinian president.

Palestinians termed the open-ended strike a protest against poor conditions and an Israeli policy of detention without trial that has been applied against thousands since the 1980s.

Israel said the move by the prisoners, many of whom were convicted of attacks or planning attacks against Israel, was politically motivated.

The protest was led by Barghouti, 58, a leader of the mainstream Fatah movement of the Palestine Liberation Organization, serving five life terms after being convicted of murder in the killing of Israelis in a 2000-2005 uprising.

The strike, if sustained, could present a challenge to Israel and raise tensions between the two sides as the 50th anniversary of the Israeli occupation of the West Bank, East Jerusalem and the Gaza Strip approaches in June.

Israeli troops and settlers pulled out of the Gaza Strip, now run by Hamas Islamists, in 2005, but peace talks on the creation of a Palestinian state collapsed with Palestinian President Mahmoud Abbas in 2014.

In an opinion piece in the New York Times on Monday, Barghouti said a strike was the only way to gain concessions after other options had failed.

“Through our hunger strike, we seek an end to these abuses … Palestinian prisoners and detainees have suffered from torture, inhumane and degrading treatment and medical negligence. Some have been killed while in detention,” he wrote.

Israeli and Palestinian media reports said Barghouti had been moved from the prison where he was being held in central Israel to another in the north and was isolated from other prisoners. The Prisons Service did not initially comment on his status.

The Israeli Foreign Ministry said in a statement: “The Palestinian prisoners are not political prisoners. They are convicted terrorists and murderers. They were brought to justice and are treated properly under international law.”

Palestinian officials said some 1,500 inmates affiliated with all political factions including rival Fatah and Hamas were taking part in the protest. An Israel Prisons Service spokesman said some 1,100 inmates at eight jails had joined the strike.

Almost 6,500 Palestinians are being held in 22 Israeli prisons, said Qadoura Fares, head of the Palestinian Prisoners’ Club that advocates on behalf of the inmates.

The Prisoners’ Club said a main demand was for Israel to halt detention without trial for some 500 Palestinians currently being held, and for an end to solitary confinement.

The strikers also want better medical treatment and that disabled inmates or those suffering chronic illness be freed, access to more television channels and more phone contact with relatives and more family visits.

The strike prompted a large rally in Gaza and a protest broke out near the occupied West Bank town of Bethlehem where Palestinian demonstrators clashed with Israeli forces.

Palestinians consider brethren held in Israeli jails as national heroes. Long-term mass hunger strikes by Palestinian prisoners are rare, but in past cases of individual inmates who stopped eating for weeks, detention terms were shortened or not renewed after they were hospitalized in critical condition.

Erdan said a field hospital would be erected next to one prison – an apparent move to pre-empt transfers to civilian medical facilities, which could draw wider media attention.

Abbas, 82, said in a statement that efforts would continue to secure prisoners’ freedom. He condemned what he called Israel’s intransigence in the face of “fair” prisoner demands.