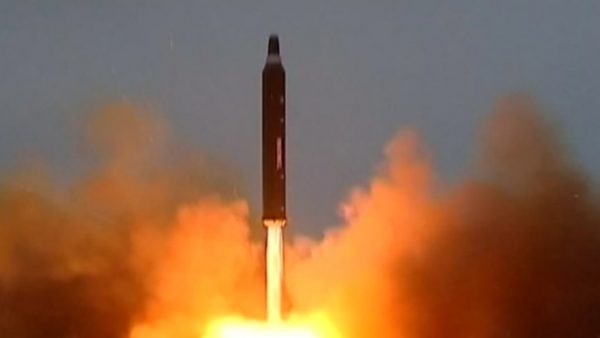 SEOUL, South Korea — North Korea launched a ballistic missile Sunday morning from near its submarine base in Sinpo on its east coast, but the launch was the latest in a series of failures just after liftoff, according to American and South Korean military officials.

The timing was a deep embarrassment for the North’s leader, Kim Jong-un, because the missile appeared to have been launched to show off his daring as a fleet of American warships approached his country to deter provocations.

Cmdr. Dave Benham, a spokesman for the United States Pacific Command, said the military had “detected and tracked what we assess was a North Korean missile launch at 11:21 a.m. Hawaii time April 15.”

The missile blew up almost immediately, and the type of missile involved is still being assessed, he said.

Over the past three years, a covert war over the missile program has broken out between North Korea and the United States. As the North’s skills grew, President Barack Obama ordered a surge in strikes against the missile launches, The New York Times reported last month, including through electronic-warfare techniques. It is unclear how successful the program has been, because it is almost impossible to tell whether any individual launch failed because of sabotage, faulty engineering or bad luck. But the North’s launch-failure rate has been extraordinarily high since Mr. Obama first accelerated the program.
In an unusually worded statement that left hanging the question of whether the United States played any role in the latest launch’s failure, Defense Secretary Jim Mattis said: “The president and his military team are aware of North Korea’s most recent unsuccessful missile launch. The president has no further comment.”

Vice President Mike Pence, en route to Seoul, South Korea, for the start of a 10-day trip through Asia, was briefed aboard Air Force Two on the North’s attempt.

Mr. Pence was in contact with President Trump about the launch, aides to the vice president told reporters traveling with him as he flew over the Bering Sea. Mr. Pence was expected to arrive in Seoul at 3:30 p.m. local time.

Hours before the unsuccessful test, three types of intercontinental ballistic missiles rolled through Pyongyang, the North’s capital, in an annual parade as the country tried to demonstrate that its military reach was expanding at a time of heightened tensions with the United States.

During the parade in Pyongyang, Mr. Kim watched from a platform surrounded by elderly military officers as long columns of goose-stepping soldiers marched through a large plaza, accompanied by tanks, missiles and rocket tubes.

Saturday was the 105th anniversary of the birth of Kim Il-sung, the country’s founder, Kim Jong-un’s grandfather and the man the younger Mr. Kim tries to emulate, in looks and action. Kim Il-sung’s birthday, called the Day of the Sun, is the North’s most important holiday and a key moment for scoring propaganda points.

The United States, China and other regional powers had feared that North Korea might mark the occasion by conducting its sixth nuclear test or by launching an intercontinental ballistic missile. The United States sent a naval strike group to the coast of the Korean Peninsula in a show of force that has become a first, wary showdown between Mr. Kim and Mr. Trump.

But no seismic tremor emanated on Saturday morning from the North’s nuclear test site, where recent satellite photographs have shown what appeared to be preparations for an underground detonation.

Instead, Mr. Kim seemed to celebrate his grandfather’s birthday with a military parade meant to demonstrate his missile capabilities. He is acutely aware that the threat that he could soon possess — a missile that could strike the continental United States — is Washington’s biggest concern, and both the number and the variety of missiles he showed on Saturday seemed to be sending the message that a pre-emptive strike against his facilities would be fruitless.

To military analysts scrutinizing North Korea’s broadcast of the parade, the most noteworthy element seemed to be three types of long-range ballistic missiles, one of them apparently new.

While the North has repeatedly claimed that it can strike the United States with a nuclear warhead, it has never flight-tested an intercontinental ballistic missile capable of crossing the Pacific.

In addition, some analysts doubt that the country has mastered the skills to build a warhead that can survive re-entry from space, or one small enough to mount on a long-range missile. They said the intercontinental ballistic missiles, or ICBMs, that had been displayed in recent North Korean military parades might have been mock-ups of systems still under development.

In a New Year’s Day speech, however, Mr. Kim claimed that his country was in the “final stage” of preparations for its first ICBM test. Mr. Trump responded with a Twitter message saying that the launching would never be permitted to happen.

One missile showed off on Saturday was the KN-08, which the North first displayed in a 2012 parade and is widely believed to have been its first attempt at an intercontinental ballistic missile.

Making their parade debut on launcher trucks with huge wheels were very large missiles encased in tubes or canisters. Analysts said the tubes appeared to have been designed for two other kinds of long-range ballistic missiles. There were multiple examples of each tube; it was impossible to see what was in them, but analysts said it was likely that they contained missiles that were either completed or under development.

Militaries use such canisters to “cold launch” missiles, ejecting them high into the air before their fuel ignites. If North Korea perfected that technology, it would help the nation better protect its mobile missiles from environmental damage while being driven around and from fiery exhaust during launch. The method can also make missiles harder to detect once fired.

“They’re not just showing off missiles that are hard to build,” said Jeffrey Lewis, a North Korea specialist at the Middlebury Institute ofInternational Studies at Monterey, in California. “They’re showing off all the associated technologies you need for credible deployments.”

Kim Dong-yub, a missile expert at the Institute for Far Eastern Studies at Kyungnam University in Seoul, said one kind of tube appeared to be for the KN-14, a modified version of the KN-08 that was first displayed in a parade in 2015, during which the North claimed that its missiles were tipped with nuclear warheads.

The other tube design was new to the analysts. “Given the size, it looks like it contains a new ballistic missile with a range of at least 6,000 kilometers,” or 3,700 miles, making it potentially an intercontinental threat, said Shin In-kyun, a military expert who runs the Korea Defense Network, a civic group specializing in military affairs. “Officials in the region will scramble to figure out whether this is a new solid-fuel, long-range ballistic missile the North was believed to be developing.”

Almost all of the North’s other ballistic missiles use liquid fuel, which can take hours to load from tanker trucks. Like bottle rockets or Roman candles, solid-fuel missiles carry their own combustible supplies, making them easier to transport and fire. North Korean missiles using the method could be kept on submarines or mobile launching pads, hidden in the country’s elaborate tunnel system and launched on short notice.

The Pukguksong-2, an intermediate-range ballistic missile that the North tested in February, uses solid-fuel technology. That missile was displayed in a parade for the first time on Saturday. So were the Pukguksong-1 — the North’s first submarine-launched ballistic missile, which was successfully tested in August — and the Scud-ER, a Scud with an extended range, designed to reach American military bases in South Korea and Japan.

North Korea launched four Scud-ERs simultaneously last month, some of them splashing down in waters in Japan’s exclusive economic zone.

This year’s parade was watched especially closely in light of the unusual level of regional tension. The United States naval strike group, led by the aircraft carrier Carl Vinson, was sent to the area in an attempt to deter North Korea from testing another nuclear device or missile.

Aides to Mr. Trump have said they are not ruling out military options in dealing with the North.

On Friday, the North Korean military threatened to launch its own pre-emptive nuclear strikes at American military bases in South Korea, Japan and beyond. Warning of “storm clouds gathering,” China, the North’s main ally, urged both sides to exercise restraint.

North Korea kept up its defiant rhetoric on Saturday. “If they start a nuclear war, we will respond with nuclear strikes,” Choe Ryong-hae, a senior official in the ruling Workers’ Party and a key aide to Mr. Kim, said in a speech before the parade.

One surprise from the parade was the re-emergence of Gen. Kim Won-hong, the former chief of the powerful secret police, the State Security Ministry.

South Korea’s National Intelligence Service had said that General Kim was dismissed and demoted in January on charges of corruption and abuse of power. In recent months, he has been absent from state functions, spurring speculation that he might have been purged and sent to a re-education camp.

But on Saturday, he was among the generals on the reviewing stand. His uniform bore his four-star insignia, but he appeared to have lost weight.