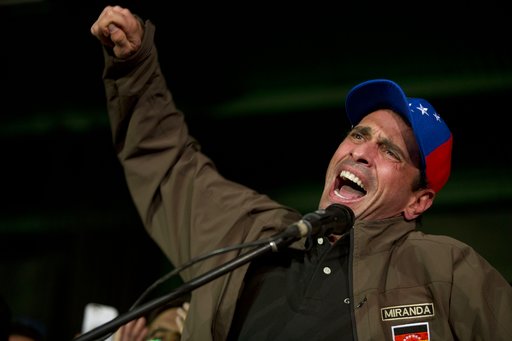 Venezuelan opposition leader Henrique Capriles speaks to supporters and reporters during a meeting in Caracas, Venezuela, Friday, April, 7, 2017. Capriles announced that he has been banned from running for office for 15 years, a move sure to ratchet up tensions amid a growing street protest movement. (AP Photo/Ariana Cubillos)
Share:
CARACAS, Venezuela (AP) — Venezuela’s government fired tear gas and rubber bullets at some of the thousands of opponents of President Nicolas Maduro who poured into the streets of Caracas Saturday amid a weeklong protest movement that shows little sign of losing steam.

The demonstrations in the capital and several other cities came a day after Maduro’s government barred top opposition leader Henrique Capriles from running for office for 15 years.

The ban capped a tumultuous 10 day-crackdown that saw pro-government groups rough up several opposition leaders and another seek refuge in a foreign embassy to escape arrest.

The protests were triggered by the Supreme Court’s decision to gut the opposition-controlled legislature of its last vestiges of power, a move that was later reversed amid widespread international condemnation and even dissent within Maduro’s normally disciplined socialist leadership.

“Nobody can disqualify the Venezuelan people,” an emotional Capriles said from a stage Saturday as he called on protesters to march to the ombudsman’s office downtown.

As the sea of protesters approached the headquarters of state-run PDVSA oil company, they were met by rubber bullets and a curtain of eye-scorching tear gas, some of it a never-before-seen red color. Mayhem ensued, with riot police racing down windy streets, dodging objects thrown from tall apartment buildings as they deployed to squash the unrest.

The violence was condemned by the opposition leadership, who nonetheless blame Maduro’s obstinacy for fueling the unrest.

They called for another protest Monday. But with Caracas shutting down for the Easter holiday – which Maduro extended by decree for three extra days – they appeared to be saving their strength for a major demonstration called for April 19.

At least 17 people were treated for injuries, according to Ramon Muchacho, a Caracas-area mayor where the demonstration took place.

Around most of Caracas, checkpoints were set up to search cars and frisk bus passengers even miles away from the clashes. As night fell, many streets still reeked of tear gas and a small group of youth burned trash and tore down street signs at busy intersections in eastern Caracas.

As the most dominant figure in the opposition over the past decade, Capriles has been at the forefront of the protests, the most combative since a wave of anti-government unrest in 2014 in which dozens of people were killed, many at the hands of security forces.

The almost-daily churn of events in what the opposition calls an “ongoing coup” by the government has energized and united the normally fractious opposition.

While opposition leaders have insisted on peaceful protest, frustration built up over 17 years of polarizing socialist rule in Venezuela is running high on both sides.

As Saturday’s march began, protesters snatched a camera from crew members working for pro-government state broadcaster VTV, chasing them away from the crowd with kicks and insults. Police, meanwhile, made social media posts of mugshots of protesters taken undercover and asked for information on the unidentified “generators of violence.”

Leaders in the ruling socialist party have accused the opposition of trying to provoke a bloodbath and its own coup.

The protesters on Saturday included 26-year-old Victoria Paez, who sported a baseball cap bearing the slogan “There’s a Way!” from Capriles’ 2012 presidential run against the late Hugo Chavez.

“Every day, the government gives us more reasons to leave our homes and protest,” said Paez, who earns less than $20 a month as a chemical engineer. She said she’s thinking about joining a sister and scores of college friends who have left the South American country seeking a better future.

While she said she was hopeful the world is beginning to see there are injustices in Venezuela, her father, Carlos Paez, was more pessimistic.

“Unfortunately, if there has to be bloodshed for the government to change, it won’t be the first time in history,” he said.

The protest movement’s immediate goal apparently is to force Maduro to call elections. Authorities last year cancelled an opposition campaign to hold a recall referendum on Maduro and no date has yet been set for gubernatorial elections that were supposed to take place last year.

The government earlier jailed another major opposition figure, hardliner Leopoldo Lopez. With both seemingly out of the running, the government may be trying to manipulate the electoral playing field to leave the opposition with less viable options should the government bow to pressure and call elections before they’re scheduled in 2018, analysts said.

“However, it is a risky strategy that will probably backfire,” Eurasia Group said in a report Friday. “The opposition is clearly fired up and this will further their cause.”