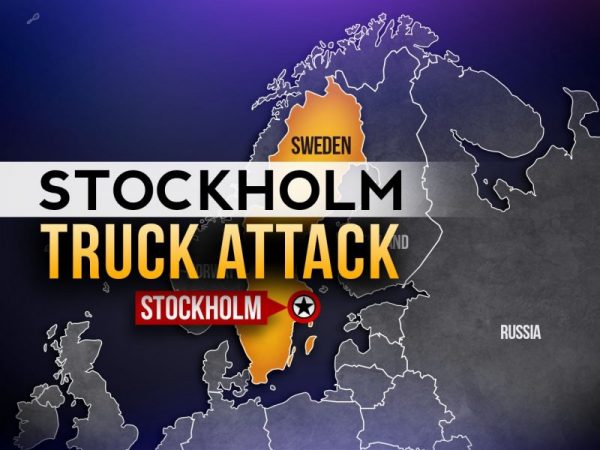 The suspect in Stockholm’s deadly beer truck attack is a 39-year-old native of Uzbekistan who had been on authorities’ radar previously, Swedish officials said Saturday. The prime minister urged citizens to “get through this” and strolled through the streets of the capital to chat with residents.

Swedes flew flags at half-staff Saturday to commemorate the four people killed and 15 wounded when the hijacked truck plowed into a crowd of shoppers Friday afternoon in Stockholm. Prime Minister Stefan Lofven declared Monday a national day of mourning, with a minute of silence at noon.

Sweden’s police chief said authorities were confident they had detained the man who carried out the attack.

“There is nothing that tells us that we have the wrong person,” Dan Eliason told a news conference Saturday, but added he did not know whether others were involved in the attack. “We cannot exclude this.”

Eliason also said police found something in the truck that “could be a bomb or an incendiary object, we are still investigating it.”

Prosecutor Hans Ihrman said the suspect has not yet spoken to authorities and could not confirm whether he was a legal resident of Sweden.

Anders Thornberg, head of the Swedish Security Service, said security services were working with other nations’ security agencies to investigate the attack, but declined to elaborate.

Police conducted overnight raids around Stockholm but declined to say if they were hunting any more suspects in the case. They said they have been questioning people in connection with the case but no one else has been detained. They said the suspect had been on their radar before but not recently, and did not explain why authorities apparently had not considered him a serious threat.

Eliason told reporters the suspect was “a more marginal character.”

Sweden’s health service said 10 people were still hospitalized for wounds from the attack and four of them were seriously injured.

Hundreds of people gathered at the site of the crash Saturday afternoon, building a wall of colorful flowers on the aluminum fences to keep the people away from the broken glass and twisted metal. Some hugged police officers near the crash site.

Visiting the attack site, Sweden’s Crown Princess Victoria laid roses on the ground Saturday and wiped away a tear.

“We must show a huge force, we must go against this,” she told reporters.

Many in Sweden were shocked by the attack, questioning whether Swedish society – considered democratic and egalitarian – had failed in some way.

Although it was not clear how long the suspect had been in Sweden, the Scandinavian country prides itself on welcoming newcomers.

In 2015, Sweden received a record 163,000 asylum-seekers. That was the highest per-capita rate in Europe, and the country’s has since reduced the number of refugees and migrants it will accept.

The stolen beer truck traveled for more than 500 yards (meters) along Drottninggatan, a main pedestrian street, before smashing into a crowd outside the popular Ahlens department store.

The crash was near the site of a December 2010 attack in which Taimour Abdulwahab, a Swedish citizen who lived in Britain, detonated a suicide bomb, killing himself and injuring two others.

Steve Eklund, 35, who works in an office nearby, said “maniacs can’t be stopped.”

“It’s very simple. Things like this will always happen in an open society,” Eklund said. “Sweden is not a totalitarian society.”

In February, U.S. President Donald Trump suggested that Sweden could be the next European country to suffer the kind of extremist attacks that have devastated France, Belgium and Germany. Two days after his remarks, a riot broke out in predominantly immigrant suburb of Stockholm where police opened fire on rioters, a surprise to many Swedes who aren’t used to officers using guns.

Lofven, Interior Minister Anders Ygeman and other government members have praised the police and the emergency services for their swift response to the attack.

“We must get through this. Life must go on,” Lofven said Saturday after again laying flowers near the crash site. “We in Sweden want an open society.”

Lofven also made a point of walking around Stockholm, including along Drottninggatan, chatting with people having coffee outside a cafe.

The prime minister said the aim of terrorism is to undermine democracy.

“But such a goal will never be achieved in Sweden,” he said.