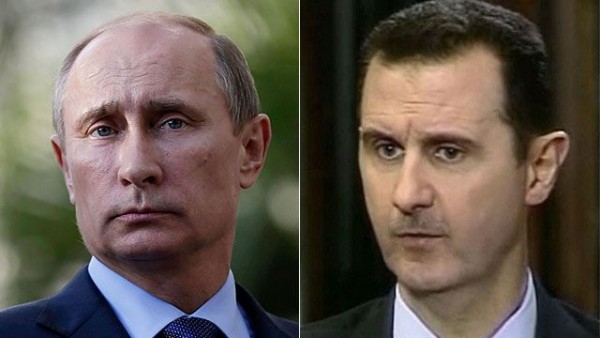 President Trump’s top diplomat will accuse Russia of complicity in Syria’s war crimes during a face-to-face meeting in Moscow this week with Vladimir Putin’s foreign minister, it was reported Sunday.

Secretary of State Rex Tillerson will demand that Russia yank its support from Bashar al-Assad’s bloody dictatorship over Syria, where hundreds of thousands of innocents have died in a savage 6-year-old civil war, the Sunday Times of London reported.

Tillerson will confront Russia with evidence that it knew about — and tried to conceal — Assad’s sarin strike last week that killed 87 people, the paper said.

Tillerson will also charge Russia with breaking its 2013 agreement to oversee the destruction of Syria’s chemical weapons, saying Moscow has “clearly failed in its responsibility” to eliminate the deadly arsenal.

In a Saturday phone call with Tillerson, Russian Foreign Minister Sergei Lavrov denied that the Syrian military had used chemical weapons in the attack on the town of Khan Sheikhoun, in Idlib province, on Tuesday.

Lavrov said that “an attack on a country whose government fights terrorism only plays into the hands of extremists,” according to a statement from the Russian ministry.

The US and Britain strongly signaled Putin that Assad’s actions can no longer be tolerated.

The trans-Atlantic allies this weekend were composing a plan to demand that Russia halt military support for Assad and let Syria transition to a new government.

British Foreign Secretary Boris Johnson canceled plans to meet Lavrov in Moscow after conferring with Tillerson and Prime Minister Theresa May on Friday.

“Someone who uses barrel bombs and chemicals to his own people cannot be the future leader of Syria,” Fallon wrote. “Assad must go.”

President Trump was visibly outraged when he announced the airstrikes Thursday night and condemned Assad for having “choked out the lives of helpless men, women and children,” and adding that “no child of God should ever suffer such horror.”

The president was deeply moved by the plea of Kassem Eid, a Syrian now living in Germany who survived a 2013 sarin-gas attack that killed about 1,400 people.

Eid, who appeared on CNN on Wednesday, begged Trump to act.

“Please, Mr. President, in the name of every woman and child and elder who got killed by the Assad regime, please come and help us,” he said.

“Don’t make the same mistake that President Obama did . . . Now you should show the world that those days are over.”

Sir Kim Darroch, Britain’s ambassador to the US, agreed with Eid, the Sunday Times reported.

“[Darroch] said that Trump had inadvertently created a political test for himself by calling Obama weak,” a security source told the paper. “By his own logic he would be weak if he did not act.”

King Abdullah of Jordan, who met with Trump at the White House Wednesday, also pressed Trump to act, sources said.

On Thursday, Trump formally authorized military strikes after arriving in Florida on Air Force One for a summit with Xi Jinping, the Chinese president, at Mar-a-Lago.

“I think it does demonstrate that President Trump is willing to act when governments and actors cross the line on violating commitments they’ve made and cross the line in the most heinous of ways,” Tillerson said after the US airstrike.

Tillerson’s trip to Moscow will follow a meeting Tuesday of G-7 foreign ministers in Italy, where he will work to solidify support for a motion censuring Russia.

“President Trump was able to do in two days what President Obama could not do in six years,” said Riad Hijab, a former Syrian prime minister who broke with Assad and joined the opposition.

Vice President Mike Pence spoke by phone with Iraqi Prime Minister Haider al-Abadi on Saturday, assuring him of continued US support in the war on ISIS despite Washington’s strike on the Syrian air base.

Pence “affirmed that US policy in the region didn’t change,” an Iraqi statement said.

Trump said he was writing to keep Congress informed “consistent with the War Powers Resolution,” a 1973 measure requiring the president to notify Congress of military action.

US intelligence indicated “that Syrian military forces operating from this airfield were responsible for the chemical weapons attack on Syrian civilians in southern Idlib province, Syria, that occurred on April 4,” Trump wrote.

The letter asserted that Trump “acted in the vital national security and foreign policy interests of the United States.”

He added that the US “will take additional action, as necessary and appropriate, to further its important national interests.”

Iran, an ally of the Assad regime, called for an impartial investigation into the chemical attack by neutral countries, reflecting claims by Assad and Russia that the chemical weapons in Khan Sheikhoun were held by rebels and hit by the regime’s missiles.

Iranian President Hassan Rouhani, speaking in a live broadcast on state television, also warned that the US strikes risked escalating extremism in the region.

“This man who claimed that he wanted to fight terrorism gave terrorist organizations a reason to celebrate, the American attack,” he said.